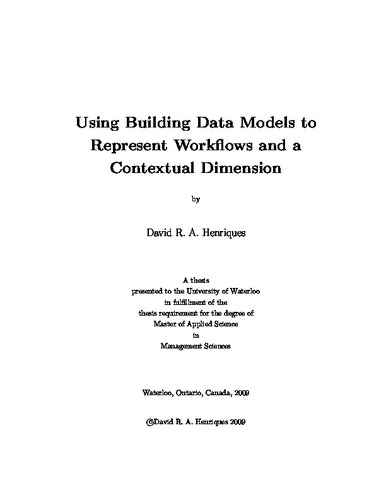 The context-workﬂow relationship is often poorly deﬁned or forgotten entirely. In workﬂow systems and applications context is either omitted, deﬁned by the workﬂow or deﬁned based on a single aspect of a contextual dimension. In complex environments this can be problematic as the deﬁnition of context is useful in determining the set of possible workﬂows. Context provides the envelope that surrounds the workﬂow and determines what is or is not possible. The relationship between workﬂow and context is also poorly deﬁned. That context can exist independently of workﬂow is often ignored, and workﬂow does not exist independently of context. Workﬂow representations void of context violate this stipulation. In order for a workﬂow representation to exist in a contextual dimension it must possess the same dimensions as the context. In this thesis we selected one contextual dimension to study, in this case the spatial dimension, and developed a comprehensive deﬁnition using building data models. Building data models are an advanced form of representation that build geometric data models into an ob ject-oriented representation consisting of common building elements. The building data model used was the Industry Foundation Classes (IFC) as it is the leading standard in this emerging ﬁeld. IFC was created for the construction of facilities and not the use of facilities at a later time. In order to incorporate workﬂows into IFC models, a zoning technique was developed in order to represent the workﬂow in IFC. The zoning concept was derived from multi-criteria layout for facilities layout and was adapted for IFC and workﬂow. Based on the above work a zoning extension was created to explore the combination of IFC, workﬂow and simulation. The extension is a proof of concept and is not intended to represent a robust formalized system. The results indicate that the use of a comprehensive deﬁnition of a contextual dimension may prove valuable to future expert systems.