The Influence of Global and Local Spatial Configuration on Wayfinding 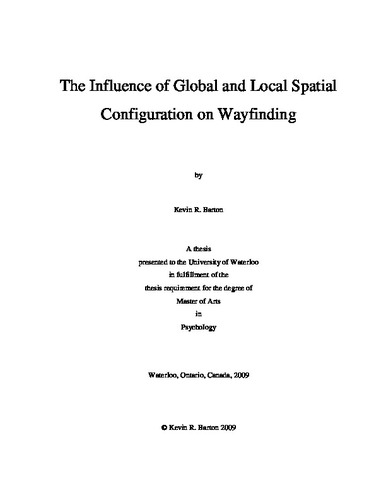 Knowledge about the configuration of an environment is used preferentially when navigating through an urban environment (Penn, 2003). However, it the locus of this effect is poorly understood. One possibility is that the local environment, such as the shape of an intersection, is sufficient to determine route choice in the context of the global configuration of an environment (Meilinger, Franz, & Bülthoff, in press; Meilinger, Knauff & Bülthoff, 2008). Two experiments were performed to investigate this hypothesis using two novel virtual environments, one with a simplistic configuration, and one with a more complicated configuration. In Experiment 1, peripheral vision was either available or constrained throughout a wayfinding task. A significant influence of global configuration information with minimal use of local configuration account was found. In Experiment 2, central vision was either limited to the local intersection or unconstrained. Again, a strong effect of configuration was found, with limited evidence for the use of local visual information. The results support a synergistic mechanism of wayfinding where the environmental configuration is used to inform existing knowledge about the environment.