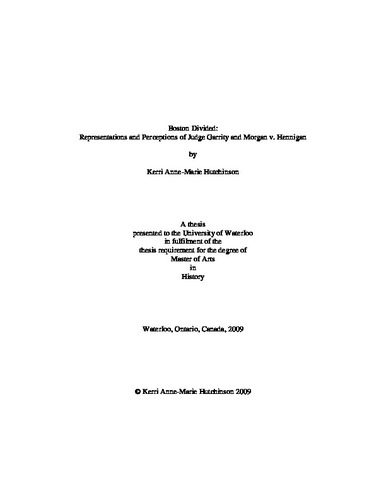 In 1974 Boston, Massachusetts was forced to confront its civil rights violations. In the case of Morgan v. Hennigan, Judge W. Arthur Garrity Jr. found the city of Boston guilty of intentionally segregating its public schools and ordered Boston to bus students to achieve integration. When busing commenced in the fall of 1974, Boston was a city divided. The citizens of Boston were divided into two main groups: the opponents and supporters but there was no uniform consensus in either group. This study will argue that the motivations for support or opposition were multi-faceted. Those who supported busing had varied reasons for their support and those who opposed busing had varied reasons for their opposition. Through the examination of local and national newspapers and letters of public opinion this work elucidates how Judge Garrity and the Morgan v. Hennigan decision were represented and perceived throughout the city.