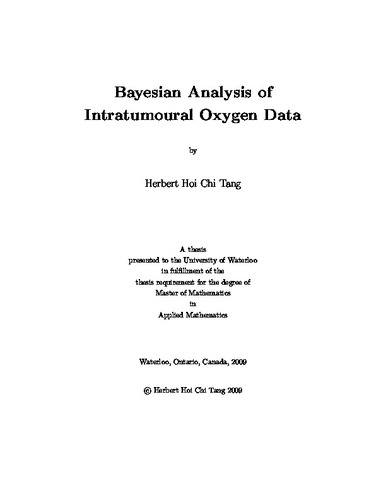 There is now ample evidence to support the notion that a lack of oxygen (hypoxia) within the tumour adversely affects the outcome of radiotherapy and whether a patient is able to remain disease free. Thus, there is increasing interest in accurately determining oxygen concentration levels within a tumour. Hypoxic regions arise naturally in cancerous tumours because of their abnormal vasculature and it is believed that oxygen is necessary in order for radiation to be effective in killing cancer cells. One method of measuring oxygen concentration within a tumour is the Eppendorf polarographic needle electrode; a method that is favored by many clinical researchers because it is the only device that is inserted directly into the tumour, and reports its findings in terms of oxygen partial pressure (PO2). Unfortunately, there are often anomalous readings in the Eppendorf measurements (negative and extremely high values) and there is little consensus as to how best to interpret the data. In this thesis, Bayesian methods are applied to estimate two measures commonly used to quantify oxygen content within a tumour in the current literature: the median PO2, and Hypoxic Proportion (HP5), the percentage of readings less than 5mmHg. The results will show that Bayesian methods of parameter estimation are able to reproduce the standard estimate for HP5 while providing an additional piece of information, the error bar, that quantifies how uncertain we believe our estimate to be. Furthermore, using the principle of Maximum Entropy, we will estimate the true median PO2 of the distribution instead of simply relying on the sample median, a value which may or may not be an accurate indication of the actual median PO2 inside the tumour. The advantage of the Bayesian method is that it takes advantage of probability theory and presents its results in the form of probability density functions. These probability density functions provide us with more information about the desired quantity than the single number that is produced in the current literature and allows us to make more accurate and informative statements about the measure of hypoxia that we are trying to estimate.