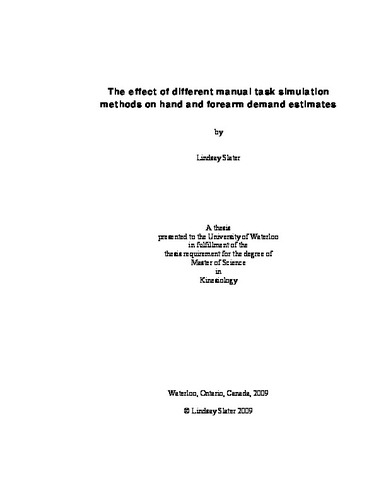 The force exerted during manual tasks is a dominant risk factor for upper-limb musculoskeletal disorders. To identify tasks that may lead to fatigue over a shift, or increase the risk of injury, the demands placed on the hand and forearm system must be quantified and predicted. The purpose of this research was to determine how different ways of simulating manual tasks affected the estimate of demand on the hand and forearm and how well normative data could be used to provide an estimate of that demand. The forces and moments required to perform 20 manual tasks were measured and simulations with three different levels of realism developed, ranging from simple feedback, with real parts, postures and timing to more controlled simulations with simplified parts, standard postures and 5s static exertions. 11 workers hired from a temporary employment agency each performed the simulated tasks and their physical demand was determined using perceived effort, the muscle activity of 8 hand and forearm muscles, and grip (or pinch) force matching. Based on these criteria, the best simulation was that with the same handle size, shape and orientation as the criterion version of the task using simple feedback to match one or two forces. Over the variety of tasks studied here, perceived effort, grip force matching and extensor digitorum activation provided the most similar demand estimate to the criterion task of all measured parameters. The more controlled simulation had the highest correlation compared with normative demand. Overall, the more changes in hand-object interface made between the task of interest and a simulation or normative data, the greater the discrepancy in demand. Normative data tended to underestimate demand, thus underestimating the risk of fatigue and injury. The use of simulations and task specific normative data to estimate hand task demand, with an accuracy useful for field measurements by ergonomists, was supported.