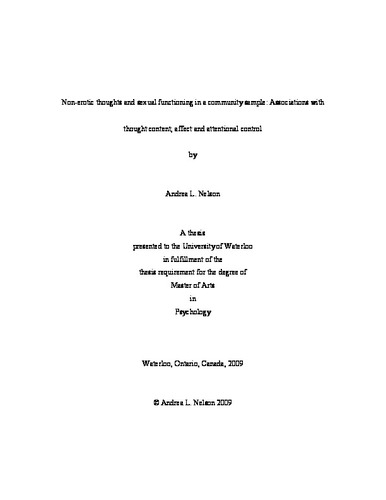 According to Barlow’s model of sexual dysfunction (1986; Sbrocco & Barlow, 1996), anxiety in sexual situations leads to attentional focus on sexual performance at the expense of erotic cues, which compromises sexual arousal. This negative experience will enhance anxiety in future sexual situations, and non-erotic thoughts (NETs) relevant to performance will receive attentional priority. Previous research with student samples (Purdon & Holdaway, 2006; Purdon & Watson, 2009) has found that people experience many types of NETs in addition to performance-relevant thoughts, and that, consistent with Barlow’s model, the frequency of and anxiety evoked by these thoughts is negatively associated with sexual functioning. Extending this previous work, the current study found that in a community sample of women (N= 81) and men (N= 72) in long-term relationships women were more likely to report body image concerns and external consequences of the sexual activity, while men were more likely to report performance-related concerns. Equally likely among men and women were thoughts regarding the emotional consequences of the sexual activity. Regardless of thought content, experiencing more frequent NETs was associated with more sexual problems in both women and men. Moreover, as per Barlow’s model, greater negative affect in anticipation of and during sexual activity predicted greater frequency of NETs and greater anxiety during sex was associated with greater difficulty dismissing the thoughts. However, greater difficulty in refocusing on erotic thoughts during sexual activity uniquely predicted more sexual problems above the frequency and dismissability of NETs. Together these data support the cognitive interference mechanism implicated by Barlow’s causal model of sexual dysfunction and have implications for the treatment of sexual problems.