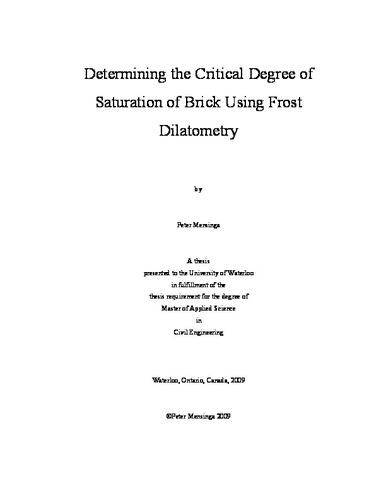 Improving the energy efficiency of the existing building stock is beneficial in terms of reducing both operational cost and environmental impact. Solid, load bearing masonry buildings comprise an appreciable part of the existing building stock, are valued for their durability and are often of historical significance, however their thermal performance is often poor. Thermal upgrades with interior insulation are usually considered risky as this lowers the drying potential of the wall enclosure which increases the moisture content of the masonry, possibly to damaging levels during freeze-thaw cycles. The current approach to assessing the suitability of brick for exterior use is based on acceptance criteria or a severe freeze-thaw test as prescribed by ASTM and CSA. The first method is based on an incomplete understanding of freeze-thaw physics. The second method subjects the bricks to a set of conditions that cannot encompass the highly variable range of in-service exposures. Past research indicates that rigid porous materials, such as brick and concrete, experience frost damage only if saturated beyond a fixed, critical degree of saturation. A more useful approach to assessing the risk of damage due to freeze-thaw would be to determine the critical degree of saturation of a material and then compare that to anticipated moisture loads under service conditions using computer modelling software such as WUFI. A test method was developed to determine the critical degree of saturation of a material requiring less than two weeks of testing by means of frost dilatometry. Representative brick were first sliced into 10 mm thick specimens. Material properties of the brick specimens were determined, including dry weight, dry density, porosity (determined by either boiling or vacuum saturation), water uptake coefficient (A-value), and initial length, to allow for computer modeling and analysis of results. The specimens were wetted to various degrees of saturation (based on either boil or vacuum saturation), sealed in a manner to ensure minimal moisture loss, and then subjected to at least six freeze-thaw cycles. The change in length of the specimens following freeze thaw testing was measured and the expansion, which in this study was expressed in terms of microstrain, plotted against degree of saturation. Any specimen that experienced expansion greater than that attributable to instrument error was considered damaged by frost. Determining the total open porosity of a material, necessary for measuring degree of saturation, is difficult due to close voids and trapped air in dead end pores. Boiling saturation and vacuum saturation are two methods commonly used to determine open porosity. For the size of specimens used in the test, almost all water absorption when using the boil method occurred during the first hour of boiling and first hour of soaking. The repeatability of boiling to determine total open porosity is low, with approximately 10% variability experienced over three rounds of boiling. Specimens absorbed a greater or equal amount of moisture using the vacuum saturation method than the boiling saturation method, indicating that vacuum saturation is more effective at determining total open porosity. The repeatability of vacuum saturation is good with very little variability observed over 3 rounds. The benefit of boiling saturation is that its equipment requirements and procedure are simpler than that of vacuum saturation. Freeze-thaw cycling was carried out by immersing the sealed specimens in a liquid bath. The change in length was determined by measuring pins attached to the specimens with an outside digital micrometer with a ratchet stop. A combination of experimentation and computer modeling showed that the samples could be wetted to target moisture contents with excellent accuracy and that moisture redistributed evenly in less than 24 hours for most samples. The minimum required temperature of the freeze cycle was chosen to be less than -12°C, in order to freeze all water contained in pores with a radius of 10nm and greater. It was determined, for the small specimen sizes used, that the cooling and warming phases should be at least one hour in duration to ensure that the specimens entirely freeze and thaw. Three sets of brick were subjected to the test to determine their critical degree of saturation: modern extruded brick, pressed brick from the 1950s, and historic brick dating to the 1870s. The older bricks experienced frost dilatation above 0.25 and 0.30 vacuum saturation respectively, with no damage evident below these thresholds. The modern extruded brick only experienced damage at 0.87 of vacuum saturation and greater. Knowledge of the critical degree of saturation of a brick allows architects and engineers to pursue retrofit strategies that increase thermal performance without jeopardizing the durability of the material by creating the conditions that allow the moisture content to increase to dangerous levels.