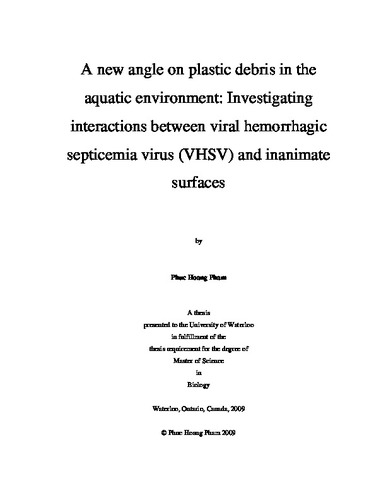 Methods of studying the interaction between fish viruses with inanimate surfaces were developed and used to explore several variables. Viral hemorrhagic septicemia virus (VHSV) was used as the model virus. The EPC cell line, which is now known to be from Fathead Minnow, was used to detect the virus through the development of cytopathic effect (CPE); this allowed virus levels to be titrated and expressed as tissue culture infectious dose (TCID50). The labour and tedium of scoring hundreds of wells for CPE was overcome through the use of the fluorescent indicator dye, Alamar Blue, which is reduced by living cells and not by dead cells to yield a fluorescent product that can be measured as relative fluorescence units (RFUs) with a fluorescent microwell plate reader. Microsoft Excel 2007 was used to compare RFU values of wells and to create a scoring template in the computer program that allowed for easy summation of the total number of wells with infectious virus. With this system and as well as with conventional scoring, surface-virus interactions were studied in the following general way. Surfaces were incubated with a solution (L-15 with 2% fetal bovine serum or FBS) of virus, rinsed, and then incubated under various conditions, either wet or dry, before being evaluated for infectious virus. The transfer of viruses through their elution from surfaces is termed elution transfer (ET) and was investigated in two ways: agitated elution and static elution. Agitated elution was done through the repeated action of pipetting up and down on either glass or plastic surfaces with different eluting solutions. The best eluting solution was 2% FBS/L-15 and the worst was tissue culture grade water. Regardless of the eluting solution, no infectious virus could be removed by agitated elution from glass Petri dishes. Static elution was demonstrated through a two-compartment culture system linked by 3.0 m pores. L-15 with 2% FBS eluted VHSV from the surface of the top chamber to infect cells in the bottom chamber and from the surface of the bottom chamber to infect cells in the top chamber. The ability of different objects to carry infectious VHSV to a new culture vessel was investigated in a protocol termed object-associated transfer (OAT). The objects were incubated with VHSV, rinsed, and then incubated wet or dry for various periods before being transferred to EPC cultures. After up to ten days of wet incubation, pieces of glass, fishing line, plastic water bottle, and pop can were able to transfer infectious virus. In contrast, when the same objects were incubated dry, they were able to transfer VHSV after only one day of drying. Fishing hooks kept wet for a day were able to transfer VHSV but dry hooks had no capacity to transfer infectious virus. A third experimental protocol was used to detect infectious viruses on surfaces and involves the surface to cell transfer (SCT) of viruses. For this protocol, EPC cells were plated directly onto plastic or glass surfaces that previously had been exposed to virus, rinsed, and incubated dry or wet at various temperatures for up to 15 days. After 15 days being kept dry at 4 °C, infectious VHSV was still found to be present on both glass and plastic surfaces. At 14 °C and room temperature, the virus was found to survive longer on plastic than on glass, and at 26 °C both surfaces retained infectious VHSV for only one day of being dry. Survival time on plastic surfaces at different temperatures was compared for wet and dry incubation. VHSV kept on plastic surface in a dry state was more susceptible to temperature inactivation, with inactivation of the virus being detected clearly after 1 day 37 °C, 10 days at 26 °C, and 15 days at room temperature.