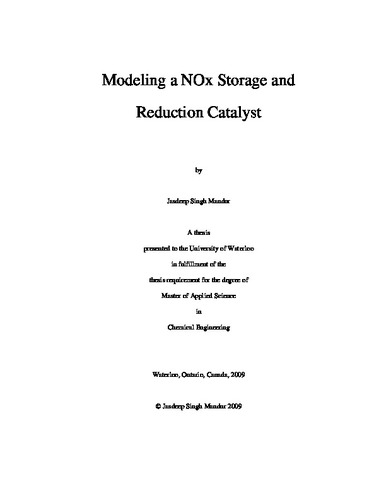 Lean burn engines are more fuel efficient than standard stoichiometric-burn engines but at the same time, the conventional three-way catalyst is not effective in reducing the NOx in oxygen-rich exhaust. One of the recent advancements in exhaust after treatment technologies for lean burn engines is the NOx storage and reduction (NSR) methodology. In this mechanism, NOx is stored on the storage component of a NSR catalyst during normal engine operation. However, before the catalyst reaches its saturation capacity, an excess of fuel is injected to the engine for a very short period resulting in reductant rich exhaust and during this period, NOx is released and subsequently reduced to N2, therefore, restoring the storage capacity of the catalyst. The operation is cyclic in nature, with the engine operating between an oxygen rich feed for long periods and a fuel rich feed for relatively shorter periods. To implement this technology in the most efficient way, a detailed understanding of the NSR chemistry under different operating conditions is required. For the past few years, several authors have studied the NSR systems using both experimental and modeling techniques. However, most of the models proposed in the literature were calibrated against the steady cyclic operation where the NOx profiles are similar for each cycle. In real life situations, the engine operation changes with different driving conditions, occurring due to sudden acceleration, roads in hilly areas, non-uniform braking, etc., which results in operation with a number of different transient cycle-to-cycle regimes depending upon the frequency with which the engine operation is altered. Due to such varying conditions, it is very important to investigate the significance of transients observed between the two different steady cycle-to-cycle operations for the optimization and control purposes. Also, the models in the literature are specific to the catalyst used in the study and therefore, their adaptation to other NSR catalysts is not straightforward. Therefore, one of the main motivations behind this research work is to develop a general approach to explain the storage dynamics. Moreover, the existing models have not studied the regeneration mechanisms, which is very important to explain the cyclic data in complete operation including both transients and steady state cycles. In this study, a pseudo one-dimensional model of a commercial NOx storage/release (NSR) catalyst is presented. The NOx storage is considered to be mass transfer limited, where as the storage proceeds, the barium carbonate particle is converted into the nitrate and for further storage, the NOx has to diffuse through this growing nitrate layer and a after certain depth, this penetration becomes nearly impossible. To explain the transient nature of the cyclic NOx profile, it is hypothesized that when incomplete regeneration occurs, only part of the nitrate is converted back to carbonate. Therefore, the nitrate layer increases in thickness with each cycle, thus making further storage increasingly more difficult. The shrinking core concept with incomplete storage in the lean phase followed by incomplete regeneration of the nitrate layer during the regeneration phase accounts for a net drop in storage capacity of the catalyst in each cycle, which continues decreasing until the amount of sites regenerated equal the amount used in NOx storage. The number of unknown parameters used for fitting were reduced by parameter sensitivity analysis and then fitted against a NOx profile at the reactor exit. The overall amount of NOx that can be stored in the lean phase of the cycle depends on the extent of regeneration that can be achieved during the previous rich phase, which in turn depends directly on the concentration of reductants in the feed. Therefore, there is a trade-off between the amount of fuel used and the NOx emissions. The proposed model can be potentially used to improve this trade-off by using model-based optimization techniques.