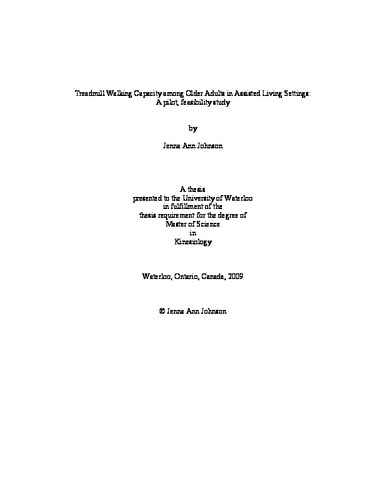 Background: Decreased physical activity levels are an increasing concern, specifically for the aging population. Older adults (>65 years) are able to achieve health benefits from participating in a regular exercise program based on studies done in younger community-dwelling older adults. However, there is less research investigating the efficacy of exercise for improving physical function among the older adult population in assisted living settings. Barriers among the research that has been done so far include generalizability, specificity and varying exercise prescription details. The present study investigated the novel idea of using a treadmill with a harness system, to engage older adults in aerobic exercise. It is unknown if it is feasible to recruit and retain older adults in assisted living settings for such a treadmill study and if older adults would be able to achieve intensities associated with health benefits. Objectives: To determine the feasibility of recruitment and retention of older adults in an assisted living facility for a pilot treadmill walking study. Secondary objectives include: to identify determinants of participation and compliance with the treadmill study and to determine if the older adult population in assisted living settings are able to achieve exercise intensities aligned with established guidelines that are associated with health benefits. Design and Setting: Pilot, multi-visit feasibility study in an Assisted Living Facility in the Kitchener-Waterloo Region with care needs ranging from Retirement Home to Palliative Care Population: Older adults (>65y) living in an assistive living facility who could follow two-step commands and were able to walk two metres independently (with or without the use of an aid). Methods: The feasibility of recruitment and retention was determined by recording: the number of older adults who consented to participate in treadmill walking for three weeks; the number of older adults (and/or their legal representatives) who declined treadmill participation and reasons as to why; and the number of participants who completed the six treadmill sessions. Healthrelated and demographic characteristics were collected to characterize the population while age, number of co-morbidities, number of medications, cognition, fear of falling and walking ability were evaluated as potential determinants of participation. A detailed attendance log was used to assess compliance with the study. To determine if participants could achieve the recommended exercise intensity associated with health benefits, exercise intensity (40 %HRR) and duration (twenty minutes) achieved after the final treadmill session were reported. Results: Thirty percent of the residents on the eligibility list were recruited and consented to participate in the treadmill study. Average compliance was 94.4%±10.8%; one treadmill participant dropped out due to declining health. There are no significant differences between treadmill participants and those who chose not to walk on the treadmill. Treadmill participants were able to achieve the recommended intensity (40%HRR) and achieved an average intensity of 50.3% ± 30.2% and a frequency of three sessions in one week. Average total duration was approximately five minutes shy (14:53min ± 6:43min) of the recommendation of twenty minutes. Conclusion: The current study provides preliminary evidence that it is feasible to recruit and retain older adults in assisted living facilities to participate in a three week treadmill walking study, however it may be difficult to recruit a large number of individuals for a larger study. Treadmill participants were able to achieve ACSM’s recommended intensity and frequency for aerobic or endurance exercise. Secondly, the older adult population living in assisted settings may be able to achieve the recommended exercise prescription targets for cardiovascular training, specifically intensity and frequency; however they may need more than three weeks of progression or multiple sessions per day to obtain the recommended duration.