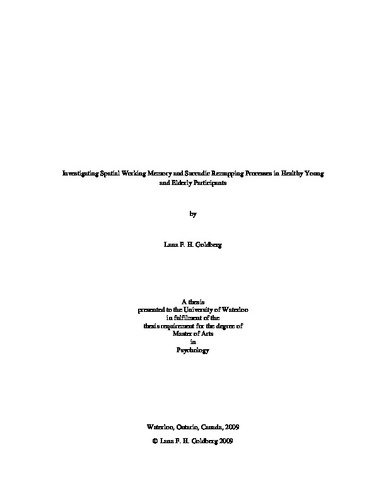 Additional cognitive deficits, including impairments in spatial working memory and/or saccadic remapping processes, have recently been implicated in unilateral neglect – a neurological condition classically characterized as a disorder of attention. The interactions between saccadic remapping and three memory processes (position memory, object memory and object-location binding) were investigated in healthy young (n=27) and elderly (n=20) participants to establish a baseline of comparison for future use with neglect patients and to study the effects of aging on these processes. In a computerized task, participants were instructed to first detect a target, and then hold in memory either its position, identity or both over a delay period. Subsequently, participants were tested on their memory for that particular task. The saccadic remapping component was introduced at the onset of the delay period with the fixation cross shifting either to the left, or right, requiring participants to remap the visual array into either right or left space, or remaining in the centre of the screen (i.e., no remapping condition). In the position memory and object-location binding task, a consistent cost to memory performance was found when remapping right only for the young participants. Overall the elderly did not perform any of the tasks involving a position memory component as well as the young participants and showed spatial asymmetries in the target detection task. The lack of an effect of remapping in the elderly group may be due to a general decrement in performance. These results are discussed in terms of hemispheric asymmetries and cognitive theories of aging.