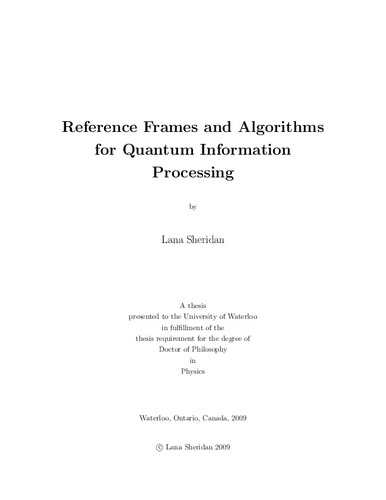 The main results of this thesis fall in to two areas, ﬁrstly quantum reference frames as a resource for quantum computations and secondly quantum algorithms. The results relating to quantum references consider their scaling with a requirements to perform measurements, operations and computations with a certain ﬁdelity. For the case of a directional frame, the central question considered is of how many operations or measurements can be performed with it before its ﬁdelity falls below some threshold. This is found to scale as the square of the size of the reference frame under for a range of physically interesting cases. To prove that result a new general form for any rotationally invariant map. This could have many applications is comparing and classifying rotationally invariant behaviour of quantum systems. Phase references are also considered for the case of performing quantum computations under an energy conservation law. The restriction that the expected energy be conserved for large quantum computations is shown to be manageable in many diﬀerent potential architectures. In the case of completing computations is an energy conserving subspace, the requirements for ancillas are sublinear in the number of qubits, and even in a circuit model implementation, the errors due to phase reference imperfections are shown to not limit the apparent algorithmic improvements of quantum computing over classical computing. A quantum walk for the novel concept of two entangled walkers is proposed and analyzed. A modest improvement is found in the scaling of the expected separation of the walkers over the separable case. It illustrates the potential for making use of particle statistic behaviour in algorithms. Lastly, the relation between discrete and continuous time models of quantum computing is explored through the analysis of a new algorithm for simulating the Hamiltonian behaviour of a black box unitary operation. The scaling of the number of calls to the unitary required to obtain a simulation correct to within a parameter ϵ is found, as is a case where the eﬃciency of the algorithm is superior to directly applying the unitary repeatedly. Applications of the algorithm are considered.