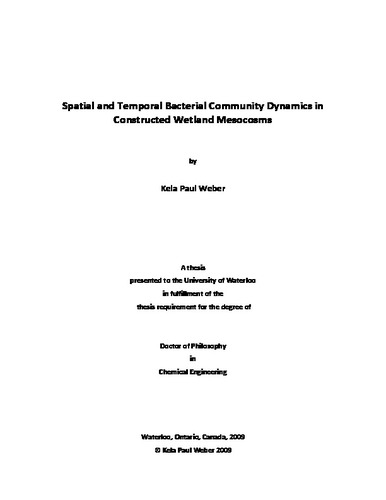 The objective of this work was to understand microbial population density and diversity, both spatially and temporally, in wetland mesocosms to gain a better fundamental understanding for use in the optimization and design of constructed wetlands (CWs). A standardized community level physiological profiling (CLPP) data analysis protocol was adapted and utilized for CW mesocosms. A new one-dimensional metric was developed to track community divergence using BIOLOGTM ECO plate data. The method proved easy to use, did not require a background in multivariate statistics, and accurately described community divergence in mesocosm systems. To study mesocosm biofilm-bound bacterial communities an appropriate detachment protocol was required. Various shaking protocols were evaluated for their effectiveness in the detachment of bacteria from mesocosm pea gravel, with a focus on detachment of viable and representative bacterial communities. A protocol based on mechanical shaking with buffer and enzymes was identified as an optimal approach and used further in this study. The bacterial communities associated with the interstitial water, pea gravel media, and rhizospheric regions from both planted and unplanted CW mesocosms were profiled using the CLPP method and compared. Vertical community stratification was observed for all mesocosm systems. Rhizospheric communities were found to be significantly more active than their gravel-associated counterparts, suggesting that although rhizospheric bacteria were less abundant in the mesocosms they may play a more significant role in the removal and fate of water born contaminants. The start-up dynamics of CW mesocosms was investigated using the CLPP and standard CW characterization methods over an eight month period. All mesocosms showed a steep increase in interstitial community divergence until day 75-100, at which point a steady-state was reached. The interstitial communities were also characterized in terms of similarity based on experimental design treatments (planted/unplanted and origin of seeding inoculum). Four stages were identified during the start-up consisting of an initial stage where mesocosm communities were differentiated based on origin of the inoculum, a period where adjustments and shifts occurred in all mesocosm, a time where all mesocosm communities were quite similar, and a final state where community differentiations were made based plant presence in the mesocosms.