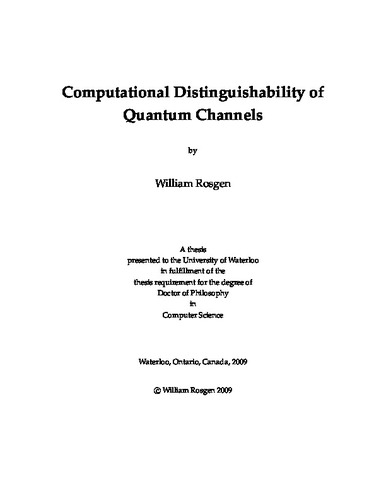 The computational problem of distinguishing two quantum channels is central to quantum computing. It is a generalization of the well-known satisfiability problem from classical to quantum computation. This problem is shown to be surprisingly hard: it is complete for the class QIP of problems that have quantum interactive proof systems, which implies that it is hard for the class PSPACE of problems solvable by a classical computation in polynomial space. Several restrictions of distinguishability are also shown to be hard. It is no easier when restricted to quantum computations of logarithmic depth, to mixed-unitary channels, to degradable channels, or to antidegradable channels. These hardness results are demonstrated by finding reductions between these classes of quantum channels. These techniques have applications outside the distinguishability problem, as the construction for mixed-unitary channels is used to prove that the additivity problem for the classical capacity of quantum channels can be equivalently restricted to the mixed unitary channels.