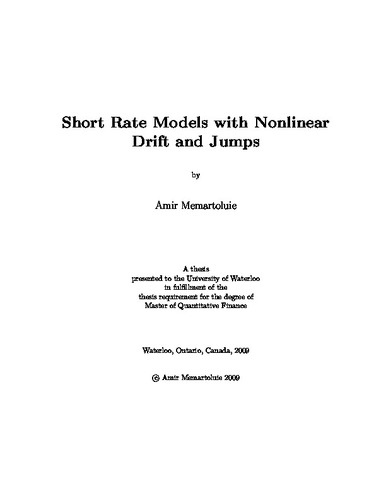 Many financial contracts can be regarded as derivative securities where the underlying state variable is one or more rates of interest. A partial list of such contracts would include zero-coupon bonds, coupon paying bonds, callable bonds, convertible bonds, retractable/extendable bonds, etc., along with a number of popular interest rate derivatives such as swaps, swaptions, caps, and floors. A commonly used strategy for valuing these contracts is to base a continuous time model for the stochastic behaviour of the short term rate of interest. Three key features of most of the models currently in use are (i) the drift, or expected change over a short time period in the level of the short term interest rate, is a linear function; (ii) the conditional variance of changes in short term interest rates is not strongly related to the level of interest rates; and (iii) the short term interest rate is assumed to follow a diffusion process, which effectively means that it cannot change too rapidly over short periods of time. Each of these assumptions appears to be made primarily for modeling convenience, as they make it possible in some cases to derive analytical expressions for the values of bonds and European-style bond options. If such solutions are not available, then numerical techniques such as Monte Carlo simulation or the numerical solution of partial differential equations are needed. However, available econometric evidence indicates that all of the assumptions noted above are questionable: changes in short term interest rates may be characterized by drift which is nonlinear and by conditional variance that depends more heavily on the level of interest rates than is assumed in models with analytic solutions. Moreover, they may be better approximated by a jump-diffusion process which allows for sudden discontinuous changes. Consequently, it is of interest to develop numerical techniques to value interest rate derivative securities for cases where the short term interest rate follows a jump-diffusion process featuring non-linear drift. This thesis describes and illustrates the use of such techniques.