An assessment of genomic sequence restoration in Arabidopsis thaliana 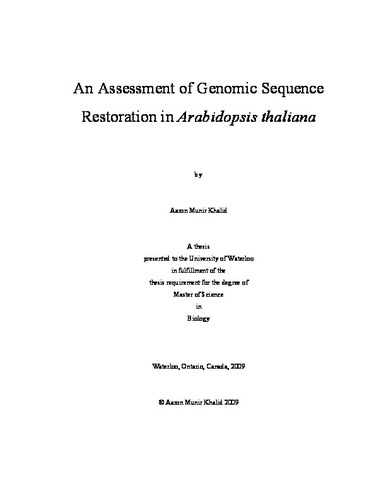 A fundamental tenet of classical Mendelian genetics is that allelic information is stably transmitted from parent to progeny. Work in our laboratory has revealed a novel exception to this law where Arabidopsis thaliana plants homozygous for the recessive organ-fusion mutation hothead (hth) gave rise to phenotypically and genotypically wild-type (HTH) progeny at high frequencies. We have coined the term restoration to describe this phenomenon, since the reverted HTH allele was not detectable in the parental genome but was present in a recent ancestor (the grandparent). Recent work in our laboratory has demonstrated that 45-94 bp insertions and deletions (indels) can also restore, irrespective of their genomic location. The work described in this thesis expands our understanding of restoration by characterizing previously identified non-parental loci at the molecular level, and monitoring the inheritance of native and transgenic alleles in hth mutant and wild-type genetic backgrounds. Two – eight hundred bp genomic intervals containing non-parental loci were cloned and sequenced. This revealed that the tracts of sequence which had been reinstated were identical in phase and sequence composition to the corresponding grandparental sequences. Furthermore, molecular markers flanking non-parental loci were profiled across 80-90 kb chromosomal regions. In all cases, the flanking markers reverted concurrently, suggesting that restoration can affect comparatively large genomic regions. However, it is not clear if flanking markers revert as a result of multiple independent events or, alternatively, are the result of one continuous restoration event. A number of individuals studied in this thesis are genetic mosaics, wherein the restoration events are localized within a single individual. Genetic mosaicism cannot be attributed to pollen contamination, and provides the strongest evidence to-date that restoration is a genuine and novel biological phenomenon. The inheritance of a transgenic allele and two native alleles was monitored in pedigrees compromising a number of distinct ancestries in hth-4, hth-8, and wild-type genetic backgrounds. Although none of the F3 progeny exhibited atypical segregation of the investigated alleles, molecular screening may have revealed localized (mosaic) restoration of the transgenic marker. However, these results remain inconclusive based on results obtained in a negative control experiment. Several significant conclusions can be derived from the work described in this thesis: (1) Restoration is a highly specific template-directed process. The template is likely of ancestral origin, although the nature of the template and the precise mechanism of restoration remain unclear. (2) Restoration frequently gives rise to individuals that are genetic mosaics, a finding that cannot be attributed to outcrossing. (3) Restored sequences are more readily identified by molecular genotyping than phenotypic screening. Possible mechanisms and recommended future studies are discussed.