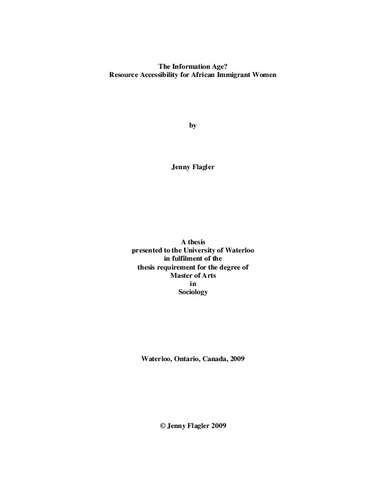 There has been an influx in the number of African people entering North America since the 1960's. Despite the fact that women who emigrate from Africa tend to be more highly educated compared to the rest of Canada's population, they are far more likely to be unemployed and low-income (Statistics Canada, 2007: 7). Economic security is linked to decision-making power in many aspects of a woman’s life, including personal safety and freedom of choice. The original research question investigated in this study was how do female African immigrants in the Region of Waterloo access the services they require to gain economic security? The intent of the study was to explore how the services in the Region of Waterloo are accessed by African immigrants with diverse cultural and linguistic backgrounds. However, during the interview process the information collected extended beyond the initial research question. The analysis of the research answers three important questions. What are the various types of resources that women need to access in order to achieve economic self-sufficiency? How do they find out what these resources are? How can they acquire them? The qualitative research used in-depth interviews that were conducted with fifteen African women living in the Region of Waterloo. The analysis of the thesis emerged from the lived experiences of the participants following a feminist ethnographic approach. Women were given the opportunity to discuss their personal backgrounds and their reasons for leaving their countries of origin from their perspectives. The barriers to economic security after arriving in the region were analyzed with special attention to the unique barriers women face because of care-taking responsibilities. The impact of the loss of social support networks was explained. The use of government support services was discussed, leading into an analysis of the lack of information regarding support services. Participants identified that there is collective action of African immigrant women in non-profit organizations operating to fill the information gap. There are a number of important conclusions that can be drawn from this research. First, the women interviewed argued that they felt that it was the government’s responsibility to provide economic support services to new African immigrant families in order to help them become established. Second, although the government does have a number of programs designed to economically assist immigrants, they are not accessible nor do they reflect the needs of African immigrant women. Third, non-profit women’s organizations in the region are effective in providing information about available resources, and do take the needs of African women into consideration. Fourth, non-profit organizations in the region empower African women locally and help them to integrate into the community. Finally, participants asserted that non-profit organizations should be funded by the government in order to be able to provide sufficient economic support to community members. This research adds to the actions of local non-profit agencies and builds a needed step in bridging that gap between government and non-profit organizations by acknowledging the contribution of non-profit organizations.