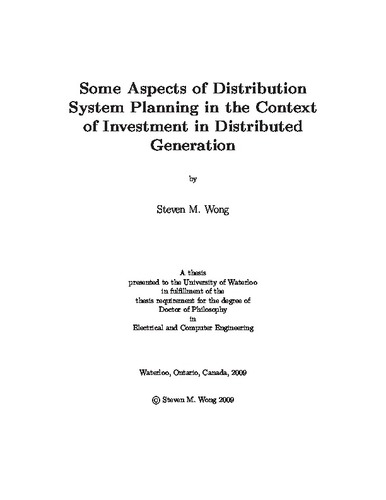 A paradigm shift in distribution system design and planning is being led by the deregulation of the power industry and the increasing adoption of distributed generation (DG). Technology advances have made DG investments feasible by both local distribution companies (LDCs) and small power producers (SPPs). LDCs are interested in finding optimal long term plans that best serve their customers at the lowest cost. SPPs, as private entities, are concerned about maximizing their rates of return. Also keenly interested in distribution design and planning is the government, which, through an electricity regulator, strives to meet DG penetration and emissions reduction goals through policy implementations. This thesis first examines the distribution system planning problem from the LDC's perspective. An innovative hierarchical dynamic optimization model is proposed for the planning of distribution systems and the energy scheduling of units that is also capable of reconciling uncoordinated SPP investments in DG. The first stage of the two-stage framework consists of a siting-cum-period planning model that sets element sizing and commissioning dates. The second stage consists of a capacity-cum-production planning model that finalizes element capacities and energy import/export and production schedules. The proposed framework is demonstrated on a 32-bus radial distribution system. Four case studies encompassing different policy sets are also conducted, demonstrating that this model's usefulness also extends to predicting the impact of different energy policies on distribution system operation and economics. The analysis of different policy sets is further expanded upon through the proposal of a new mathematical model that approaches the distribution design problem from the regulator's perspective. Various case studies examining policies that may be used by the regulator to meet DG penetration and emissions goals, through DG investment, are constructed. A combination of feed-in-tariffs, CO$_2$ tax, and cap-and-trade mechanisms are among the policies studied. The results, in the context of Ontario, Canada and its Standard Offer Program, are discussed, with respect to achieving objectives in DG investment, participation by SPPs, consumer costs, and uncertainty in carbon market prices. In jurisdictions such as Ontario, the LDC cannot invest in its own DG capacity but must accommodate those of SPPs. With the successful implementation of DG investment incentives by the regulator, there is a potential for significant investments in DG by SPPs, which may exceed that of the LDCs ability to absorb. This thesis proposes a novel method that can be used by the regulator or LDC to fairly assess, coordinate, and approve multiple competing investments proposals while maintaining operational feasibility of the distribution system. This method uses a feedback between the LDC and SPPs to achieve maximum investor participation while adhering to the technical operational limits of the distribution system. The proposed scheme is successfully demonstrated on a 32-bus radial distribution system, where it is shown to increase SPP-DG investments and production, improve the system's voltage profile, and reduce losses.

Steven M. Wong (2009). Some Aspects of Distribution System Planning in the Context of Investment in Distributed Generation. UWSpace. http://hdl.handle.net/10012/4618