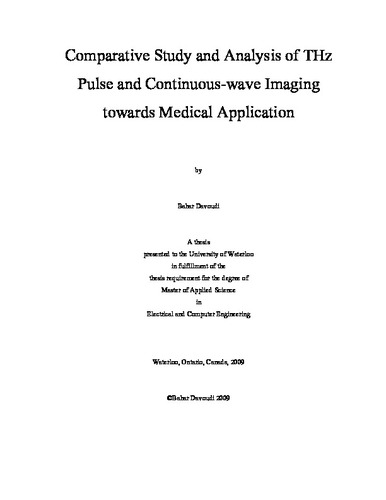 Until recently, there had been a gap between the output frequencies of electronic and optical sources, which included waves of frequencies around 300 GHz to 3 THz and was known as the Terahertz gap. After the development of sources and detectors that operated at these frequencies, Terahertz radiation began to find its way through a variety of applications such as surveillance, spectroscopy and medical imaging. Terahertz radiation has been used in medical imaging experiments on different in-vitro and some in-vivo biological tissues and has shown promising results in differentiating certain features in those tissues. Moreover, it has demonstrated well in detecting certain polar molecules due to these molecules’ fingerprint in Terahertz range of frequencies. Considering these facts, Terahertz has been proved to have the potential for being a perspective medical imaging method, which can be used as a complement to other imaging techniques such as MRI or X-ray or even as a separate method. Due to the capacity of Terahertz radiation, much research is being done on using Terahertz generation-detection set-ups for medical imaging and improving the imaging parameters of these set-ups to capture more precise and meaningful images. In this thesis, the imaging parameters of two different THz imaging set-ups have been studied and compared. One of these imaging set-ups is a THz pulse set-up with photoconductive dipole antennas as source and detector and the other one is a continuous-wave set-up with a backward wave oscillator as the source and a Golay cell as the detector. To the best of our knowledge, a comparative analysis of the imaging parameters of these two types of THz imaging set-ups has not been performed previously. In this thesis, parameters such as modulation transfer function (MTF), resolution and beam profile have been measured through the experiments, for both the THz pulse and THz CW imaging set-ups. These results are compared to the results obtained by theoretical formulas and the reason for any differences occurred between these two results has been explained. Moreover, the imaging parameters found from the experiments for the two set-ups have been compared together and similarities and differences have been discussed. In this thesis, a set of experiments has also been done to verify the capability of the two imaging set-ups for in-vitro tooth imaging, towards developing THz imaging systems suitable for clinical imaging application. These experiments have been performed on a tooth crown sample with the pulse set-up and on a tooth cross-section sample with the continuous-wave set-up. The capability of our THz pulse imaging system to distinguish thickness variations in a tooth crown sample by time-of-flight imaging has been shown and discussed.