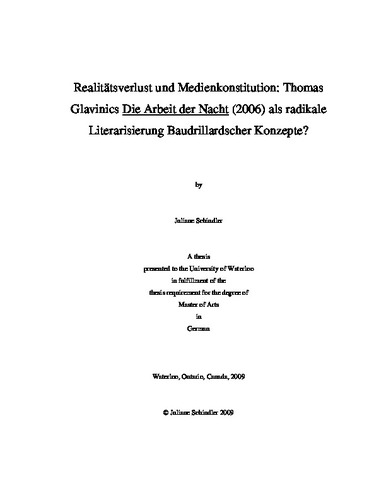 In this thesis I argue that Thomas Glavinic’s novel Die Arbeit der Nacht (Night Work) investigates existential themes of the human condition in a post-modern world. My analysis demonstrates that the novel can be understood – at least in part – as a radical implementation of Jean Baudrillard’s ideas of simulation and hyperreality. My analysis reveals the message of the novel regarding our relationship to media and technology in contemporary society. Glavinic’s novel demonstrates that digital media and new technologies are indeed integral to post-modern human beings, but it also maintains that they cannot substitute for interpersonal contact. Textual references to contemporary Western society are numerous and intended to give the readers the opportunity not only to identify with, but also to reflect on their own situations. The central character Jonas is representative of an average Western individual who maintains a need to be part of a social network. I argue that he can be read as a post-modern protagonist. Considering these findings, I conclude that the novel warns of the dangers of a world saturated by media where we underestimate the importance of close personal human contact and, as a consequence, are in danger of losing our sense of humanity. In my first chapter, I introduce the novel and Baudrillard’s key ideas of hyperreality: the disappearance of human existence as we know it, the prevalence of video culture, and a reliance on technology that ultimately function as prostheses. In the second chapter, I analyze the relationship of media to individuals based on Baudrillard’s thesis that in hyperreality, digital technology becomes part of the human body. I argue that Glavinic’s protagonist can no longer be considered a self-determined, essential human being, but rather is defined by media and technology. The continued encroachment of hyperreality on Jonas’s life results in his cars, cell-phone, and self-created antagonist, the so-called “sleeper,” functioning, in Baudrillard’s terminology, as “prostheses.” The third chapter is concerned with the media’s construction of reality based on four examples: Video cameras, digital and Polaroid cameras, television screens and mirrors. The first three examples impart a sense of hyperreality into our lives. In Baudrillard’s theories the mirror is designated as obsolete; however, in this analysis I show that even in a post-modern world it remains an important motif. In my fourth chapter, I examine Jonas’s attempts to construct a linear time structure despite the intermittent appearances of non-linear ones. Following Baudrillard’s classification of the three different orders of the simulacrum as being imitation, serial production and simulation, I conclude that Jonas is situated in the simulacrum of simulation, which constitutes hyperreality. Despite the obvious applicability of Baudrillard’s ideas to Glavinic’s novel, I ultimately conclude, that it does not follow all of Baudrillard’s arguments. I propose instead that the novel allows for a much more optimistic view of a high-tech world than is immediately apparent.