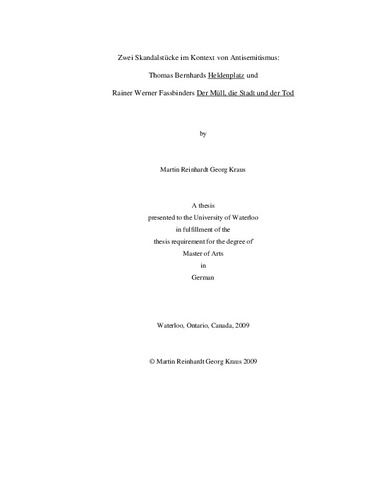 In the 1980s Rainer Werner Fassbinders Der Müll, die Stadt und der Tod (1976) and Thomas Bernhard’s Heldenplatz (1988) caused two of the biggest theatre scandals in the history of German-language literature, leading to extensive debates in the media. A comparative examination of the “Fassbinder-Kontroversen” (1976, 1984, 1985) and the “Causa Heldenplatz” (1988) reveals many crucial similarities. Both scandals must be understood within their historical and political context. Der Müll, die Stadt und der Tod was highly criticized as an anti-Semitic play, while Heldenplatz was said to slander crassly the Austrian people. Bernhard was also attacked for using Jews in a way which could reinforce latent anti-Semitic sentiments. This thesis questions such premises for their reductive readings of these texts. Bernhard’s Heldenplatz can certainly be perceived as a play that was made to be scandal-provoking. Sigmund Freud’s and William G. Niederland’s theories on trauma, however, can lead to a deeper understanding of the text beyond the obvious level of provocation. Most commentary on the play criticizes it for portraying Jews as psychically diseased. My claim, by contrast, is that their neuroticism or traumatization should not be interpreted as limiting the political validity of their comments, but rather as an essential aspect of their protest against Austria’s repression of its involvement in Nazi crimes. Like Heldenplatz, Fassbinder’s Der Müll, die Stadt und der Tod can be seen as a text that refutes the denial that there is no anti-Semitism in post-war German-speaking societies. The difference is that Fassbinder deals with the traumatization of his characters counter-intuitively, namely, by introducing the ironic, distancing effects of camp. In her essay „Notes on ‚Camp‘“, Susan Sontag claims that camp “sees everything in quotation marks”. An analysis of Fassbinder’s play reveals it to be a montage of citations and stereotypes. He thereby deconstructs and denounces stereotypes about Jews.