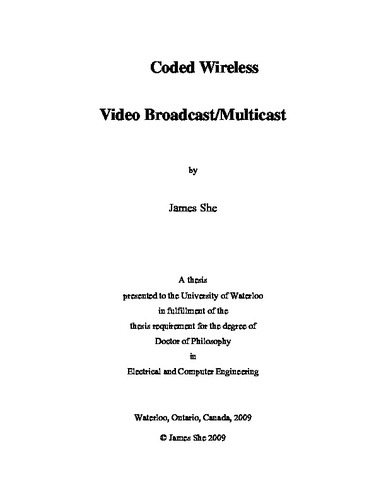 Advancements in video coding, compact media display, and communication devices, particularly in emerging broadband wireless access networks, have created many foreseeable and exciting applications of video broadcast/multicast over the wireless meidum. For efficient and robust wireless video broadcast/multicast under fading, this thesis presents and examines a novel cross-layer framework that exploits the interplay between applying protections on a successively refinable video source and transmitting through a layered broadcast/multicast channel. The framework is realistically achieved and evaluated by using multiple description coding (MDC) on a scalable video source and using superposition coding (SPC) for layered broadcast/multicast transmissions. An analytical model using the total received/recovered video bitstreams from each coded wireless broadcast/multicast signal is developed, which serves as a metric of video quality for the system analysis and optimization. An efficient methodology has demonstrated that optimal power allocations and modulation selections can be practically determined to improve the broadcast/multicast video quality. From the information-theoretical perspective, a general closed-form formula is derived for the end-to-end distortion analysis of the proposed framework, which is applicable to any (n, k) protection code applied on a successive refinable source with a Gaussian distribution over layered Gaussian broadcast channels. The results reveal the scenarios for the proposed framework to lead to a lower distortion than a legacy system without any protection. By analyzing the characteristics of the closed-form formula, an efficient O(n log n) algorithm is developed to determine optimal k values in the (n, k) protection codes that minimize the distortion under the framework. Finally, a cross-layer design of logical SPC modulation is introduced to achieve layered broadcast/multicast for scalable video. It serves as an alternative for practically implementing the proposed framework of coded wireless video broadcast/multicast, if the hardware-based SPC component is not available in a wireless system. In summary, the thesis presents comprehensive analyses, simulations, and experiments to understand, investigate, and justify the effectiveness of the proposed cross-layer framework of coded wireless video broadcast/multicast. More importantly, this thesis contributes to the advancement in the related fields of communication engineering and information theory by introducing a new design dimension in terms of protection. This is unique when compared to previously-reported layered approaches that are often manipulating conventional parameters alone such as power and modulation scheme. The impact of this dimension was unapparent in the past, but is now proven as an effective means to enable high-quality, efficient, and robust wireless video broadcast/multicast for promising media applications.