The 2006 Russia-Ukraine Natural Gas Dispute: A mechanisms based approach 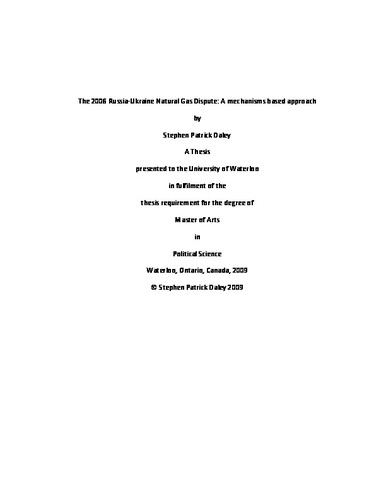 This thesis addresses the factors which lead the Russian government to increase natural gas prices for Ukraine in 2006. Through the use of methodological individualism, an explanation which links system, state, and individual levels of analysis is constructed. The system level variables concerned include global energy prices and the increasing importance of Turkmen natural gas to Russia and other regional gas consumers. State level variables, include changes in Russia’s patrimonial society (changing source of rents, increased authoritarianism); and increasing state control over Russia’s natural gas industry. Changes in these conditioning factors influence individuals’ beliefs about their preferred source of rents, and the nature of their rent seeking and distributing. The resulting actions bring about variations in Russia’s natural gas price for Ukraine. This framework is tested over three time periods (1995-1999, 2000-2004, 2004-2008) selected based on the nature of the conditioning variables over those years. Evidence from these case studies suggests that the above mentioned factors played a large role in the Russian government’s decision. Further, it is concluded that methodological individualism offers a way to bring together system, state, and individual levels of analysis when explaining this event, and perhaps other events in international politics.