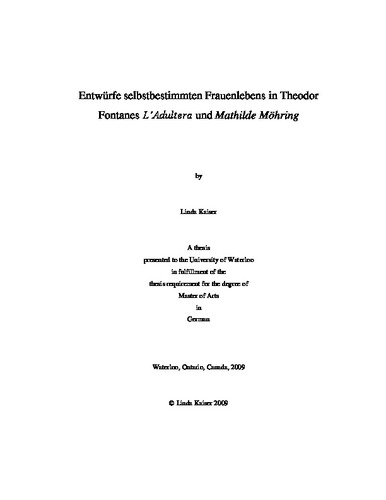 Few authors in the second half of the nineteenth century wrote in such a decisive way on the subject of women as Theodor Fontane, who produced literary studies on women’s lives, determined both by others and by the women themselves. Of Fontane’s seventeen novels, thirteen focus on female characters. In his texts, Fontane questions the concept of a hierarchy of genders and the ambivalence between the intended femininity of women and the “imaginierte Weiblichkeit” (imagined femininity) of men (Silvia Bovenschen). In doing so, he contributes significantly to the gender discourse of the late nineteenth century, creating new images of women that often differed from common literary images, including the femme fatale, femme fragile or the water-nymph. This divergence is especially evident in Fontane’s construction of his female protagonists Melanie Van der Straaten and Mathilde Möhring. This thesis examines the similarities between Fontane’s conceptions of the self-determined life of women in his lesser-known novels L’Adultera (1882) and Mathilde Möhring (1906). It poses the question: How can the protagonist Melanie in the first work of the Berlin Women Novels be seen as a precursor to the protagonist Mathilde in the last book of the series? The works of Silvia Bovenschen, Inge Stephan, Sigrid Weigel and Ute Frevert point to the discrepancies between the realities of life of eighteenth- and nineteenth-century women and the ways in which they were portrayed by contemporary male authors. I apply their insights on identity, literary and historio-cultural representations of femininity in my analysis of the images of women contained in the two texts. After giving an overview of the status of research concerning Fontane and femininity (Chapter 2) and the approach of Bovenschen, Stephan, Weigel and Frevert (Chapter 3), I discuss the narrative presentation of femaleness and examine how Fontane’s conception of the women in both works is represented (Chapter 4 and 5). Here, I analyze the characters in light of two identity-attributions: other-directedness and self-determination. In Chapter 4, I examine the depiction of other-directedness in both novels. The emphasis of my analysis here lies on the male characters and their perceptions of the two female protagonists. Chapter 5 examines the notion of self-determination in both novels. It is concerned primarily with the female protagonists and their images of themselves. This chapter also delves into the narrators’ views of this self-perception. I conclude that despite the obvious differences between these two female characters, there are similarities between them, and that Mathilde can be seen as a modern successor of Melanie.