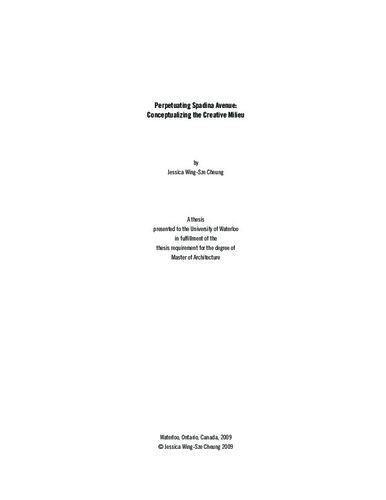 This thesis begins with Toronto’s Spadina Avenue. Admiration for its social and cultural past and present contrasts with its seemingly inevitable future; ethnically charged sections of the avenue will succumb to real estate pressures and be lost to new market-driven development. Focusing on the section of Spadina Avenue bound by College Street to the north and Queen Street West to the south, its central location and surrounding diversity; partially deteriorating urban fabric; history of immigrants and the working class; and demographic transitions are conditions that inform the framework for the generation of a “creative milieu” as means of perpetuating the inherent spirit of Spadina Avenue. Charles Landry defines the “creative milieu” as a place – either a cluster of buildings, a part of a city, a city as a whole or region – that contains the necessary preconditions in terms of “hard” and “soft” infrastructure to generate a flow of ideas and inventions. To understand its greater context, this thesis examines the merits of the original “creative city” concept developed by Landry along with the implications of globalization and gentrification which affirms the vital role of the working class and their communities in the city. The “creative milieu” can form the genesis for the “creative city”, acting as catalytic sites where creativity and culture can be expressed, explored and nurtured. This thesis presents a catalogue of proposed typologies for Spadina Avenue that consider four characteristics of a “creative milieu” – diversity, interactivity, locality, capacity – and range in scale from small to large interventions.