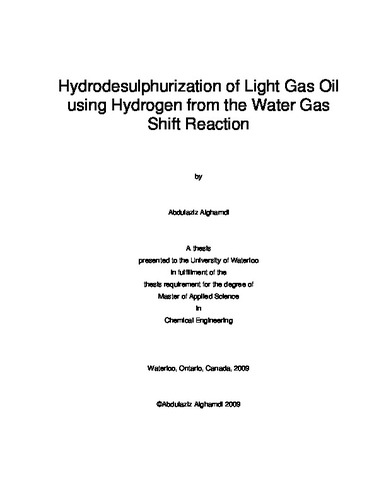 The production of clean fuel faces the challenges of high production cost and complying with stricter environmental regulations. In this research, the ability of using a novel technology of upgrading heavy oil to treat Light Gas Oil (LGO) will be investigated. The target of this project is to produce cleaner transportation fuel with much lower cost of production. Recently, a novel process for upgrading of heavy oil has been developed at University of Waterloo. It is combining the two essential processes in bitumen upgrading; emulsion breaking and hydroprocessing into one process. The water in the emulsion is used to generate in situ hydrogen from the Water Gas Shift Reaction (WGSR). This hydrogen can be used for the hydrogenation and hydrotreating reaction which includes sulfur removal instead of the expensive molecular hydrogen. This process can be carried out for the upgrading of the bitumen emulsion which would improve its quality. In this study, the hydrodesulphurization (HDS) of LGO was conducted using in situ hydrogen produced via the Water Gas Shift Reaction (WGSR). The main objective of this experimental study is to evaluate the possibility of producing clean LGO over dispersed molybdenum sulphide catalyst and to evaluate the effect of different promoters and syn-gas on the activity of the dispersed Mo catalyst. Experiments were carried out in a 300 ml Autoclave batch reactor under 600 psi (initially) at 391oC for 1 to 3 hours and different amounts of water. After the hydrotreating reaction, the gas samples were collected and the conversion of carbon monoxide to hydrogen via WGSR was determined using a refinery gas analyzer. The sulphur content in liquid sample was analyzed via X-Ray Fluorescence. Experimental results showed that using more water will enhance WGSR but at the same time inhibits the HDS reaction. It was also shown that the amount of sulfur removed depends on the reaction time. The plan is to investigate the effect of synthesis gas (syngas) molar ratio by varying CO to H2 ratio. It is also planned to use different catalysts promoters and compare them with the un-promoted Mo based catalysts to achieve the optimum reaction conditions for treating LGO. The results of this study showed that Ni and Co have a promoting effect over un-promoted Mo catalysts for both HDS and WGSR. Ni was found to be the best promoter for both reactions. Fe showed no significant effect for both WGSR and HDS. V and K have a good promoting effect in WGSR but they inhibited the HDS reaction. Potassium was found to be the strongest inhibitor for the HDS reaction since no sulfur was removed during the reaction