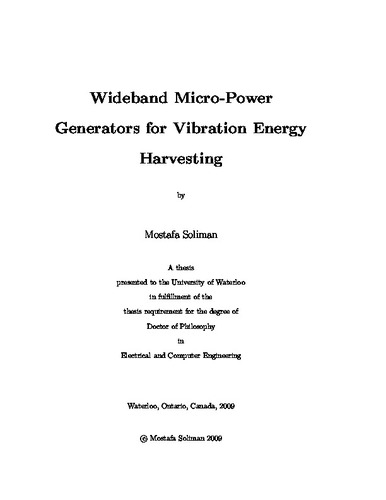 Energy harvesters collect and convert energy available in the environment into useful electrical power to satisfy the power requirements of autonomous systems. Vibration energy is a prevalent source of waste energy in industrial and built environments. Vibration-based energy harvesters, or vibration-based micro power generators (VBMPGs), utilize a transducer, a mechanical oscillator in this application, to capture kinetic energy from environmental vibrations and to convert it into electrical energy using electromagnetic, electrostatic, or piezoelectric transduction mechanisms. A key design feature of all VBMPGs, regardless of their transduction mechanism, is that they are optimally tuned to harvest vibration energy within a narrow frequency band in the neighborhood of the natural frequency of the oscillator. Outside this band, the output power is too low to be conditioned and utilized. This limitation is exacerbated by the fact that VBMPGs are also designed to have high quality factors to minimize energy dissipation, further narrowing the optimal operating frequency band. Vibrations in most environments, however, are random and wideband. As a result, VBMPGs can harvest energy only for a relatively limited period of time, which imposes excessive constraints on their usability. A new architecture for wideband VBMPGs is the main contribution of this thesis. The new design is general in the sense that it can be applied to any of the three transduction mechanisms listed above. The linear oscillator is replaced with a piecewise-linear oscillator as the energy-harvesting element of the VBMPG. The new architecture has been found to increase the bandwidth of the VBMPG during a frequency up-sweep, while maintaining the same bandwidth in a frequency downsweep. Experimental results show that using the new architecture results in a 313% increase in the width of the bandwidth compared to that produced by traditional architecture. Simulations show that under random-frequency excitations, the new architecture collects more energy than traditional architecture. In addition, the knowledge acquired has been used to build a wideband electromagnetic VBMPG using MicroElectroMechanical Systems, MEMS, technology. This research indicates that a variety of piecewise-linear oscillators, including impact oscillators, can be implemented on MPG structures that have been built using MEMS technology. When the scale of the MPGs is reduced, lower losses are likely during contact between the moving oscillators and the stopper, which will lead to an increase in bandwidth and hence in the amount of energy collected. Finally, a design procedure has been developed for optimizing such wideband MPGs. This research showed that wideband MPGs require two design optimization steps in addition to the traditional technique, which is used in all types of generators, of minimizing mechanical energy losses through structural design and material selection. The first step for both regular and wideband MPGs minimizes the MPG damping ratio by increasing the mass and stiffness of the MPG by a common factor until the effect of size causes the rate at which energy losses increase to accelerate beyond that common factor. The second step, which is specific to wideband MPGs, tailors the output power and bandwidth to fit the Probability Density Function, PDF, of environmental vibrations. A figure of merit FoM was devised to quantify the quality of this fit. Experimental results show that with this procedure, the bandwidth at half-power level increases to more than 600% of the original VBMPG bandwidth.