Topics in Quantum Foundations: Ontological Models, and Distinguishability as a Resource 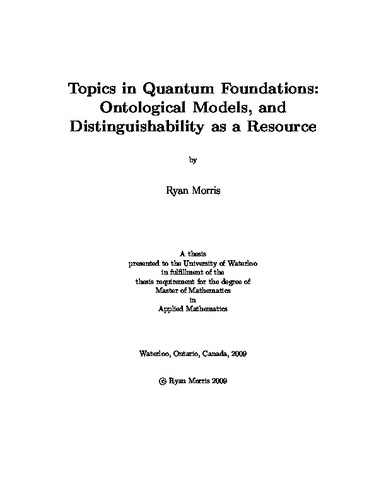 This thesis covers research in two disjoint research areas: The ontological model program (formerly hidden-variables program) for quantum theory has a long and noble tradition in the quantum foundations literature. By postulating a physical reality beyond the quantum state, we gain intuition on quantum phenomena and also come to understand constraints on realist interpretations of quantum theory. Bell's theorem tells us that such an underlying reality must be non-local, while the Kochen-Specker contextuality theorem abuses the classical notion that measurement should simply reveal pre-existing properties of reality. Recent research programs suggest that it is beneficial to view the quantum state as representing purely information. We show that the only current model which does this in a satisfactory manner is unable to reproduce all the statistics of quantum measurements. A recent generalization of the notion of contextuality has allowed for proofs of contextuality which differ from the original Kochen-Specker notion. We add a new result which shows that measurements in a model where the quantum state represents information must be contextual. Additionally, we refine the generalized notion of contextuality into strong and weak forms in order to parse the relationship between new and old results. Entanglement resource theory is a highly successful investigation of the usefulness of entanglement for information processing tasks. In this thesis we apply the ideas from entanglement resource theory to another resource: state distinguishability. We show analogies between distinguishability resource theory and entanglement resource theory. In particular, the analogy includes: measures which are monotonic under a class of transformations; units of a resource; and bounds on measures in terms of the amount of the unit resource needed to form states and the amount of unit resource that can be extracted from states. We show that the pairs of states which can be reversibly converted into \emph{classical states} are exactly the pairs of simultaneously diagonalizable states. Lastly, we characterize the trace-distance distinguishability of formation on a qubit system.