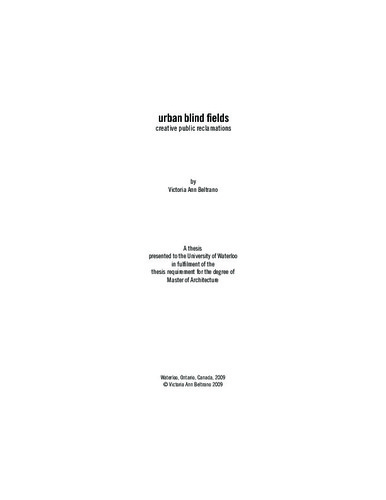 Contemporary criticism of the North American urban public realm has reached an unproductive state of exhaustion. For some time, it has painted a rather bleak portrait of public space attributed to the impacts of global private economic forces, the disintegration of traditional civic ideals and an increasing uncertainty in its ideal (or even relevant) spatial form. If a productive and meaningful dialogue about the public realm and architecture’s contribution to it is to emerge, a more complete definition of this realm must include the impacts of its informal others. This research-based thesis examines the city’s spaces and actors of hidden appearance as a contribution to that expanded definition. In so doing, it finds a more appropriate means for their description in what Henri Lefebvre terms the urban blind field. Just as the human eye’s blind spot is subjective, the urban blind field too is dynamic and shifting. Looking from multiple viewpoints is necessary to the blind field’s exposure and more genuine portrayal. The research centres around a series of blind fields encountered during field research undertaken across Toronto, Canada. Each is reconceived and foregrounded through participant actions upon them, rather than by professional design alone. Three fundamental urban acts — play, exchange and cultivation — serve as a loose framework for the theoretical, photographic and discursive explorations thereof. This thesis asserts that blind fields possess within them the seeds of active urban democracy — challenging contemporary criticism’s bleak claims. Therefore, their maintenance is paramount to a rich and active ongoing public realm. As a relational concept, the blind field also exposes a fertile means of reconsidering architectural praxis and its relationship to space, material, time and participatory hierarchies.