Basic Processes in Reading: Spatial Attention as a Necessary Preliminary to Lexical/Semantic Processing 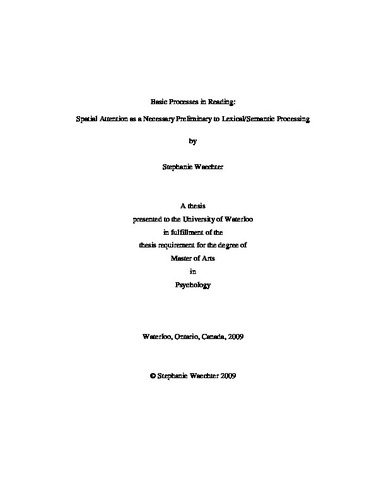 The question of whether words can be identified without spatial attention has been a topic of considerable interest over the last five and a half decades, but the literature has yielded mixed conclusions. Some studies show substantial effects of distractor words which are argued to appear outside of spatial attention, whereas a small number of other studies show no evidence of such effects. I argue that at least some of the discrepant results can be understood in terms of failures to optimally focus attention at the cued location. The present experiments manipulated the proportion of valid trials to encourage distributed (Experiments 1 and 3) or focused (Experiments 2 and 4) spatial attention. Participants read aloud a target word, and the impact of a simultaneously presented distractor word was assessed. Semantic and repetition distractor effects were present when conditions promoted distributed spatial attention, but distractor effects were absent when conditions promoted focused spatial attention. These data are consistent with the proposal that (1) the allocation of spatial attention across displays is strongly context-dependent and (2) spatial attention is a necessary preliminary to lexical/semantic processing.