The Influence of Mesoscale Eddies on the Internal Tide 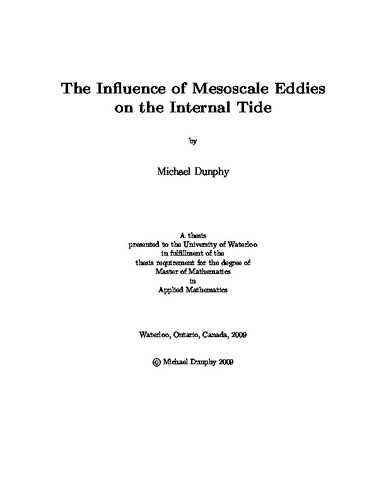 The barotropic tide dissipates a well established estimate of 2.5 TW of energy at the M2 frequency. Bottom topography is responsible for part of this dissipation, and the generation of the internal tide is also partly responsible. The fate of this energy is largely described by a cascade from large scales to small scales by non-linear wave-wave interactions where it gets dissipated. This thesis aims to investigate how the presence of mesoscale eddies (vortices) in the ocean affect the internal tide. Previous work has looked at the interaction of the barotropic tide with eddies. Krauss (1999) found that the interaction can produce a modulated internal tide, however a scaling analysis suggests that the effect may not be as strong as reported. The MITgcm is used to simulate internal wave generation by barotropic flow over topography and comparisons are made with Dr. Lamb's IGW model. Baroclinic eddies are analytically prescribed and then geostrophically adjusted also using the MITgcm. Finally, the two are combined, and the internal tide field is analysed with and without the presence of eddies of various magnitude and length scales. The results of this investigation do not find a strong transfer of energy between modes; the modal distribution of energy in the internal tide remains the same when an eddy is added. However, focusing and shadow beams of internal waves are produced in the wake of an eddy as the internal waves pass through it. The beams show very strong variations in intensity, vertically integrated energy flux can reduce almost to zero in the shadow regions and increase more than double in the focusing regions. Modal decomposition of the horizontal flow field reveals that mode 2 and 3 waves are most strongly affected by the eddies and contribute strongly to the formation of the beams. Mode 1 appears to be less affected by the eddy. The larger wavelength and faster group velocity of mode 1 supports the notion that the eddy interacts with it less.