Drag Reduction with the Aid of Air Bubbles and Additives 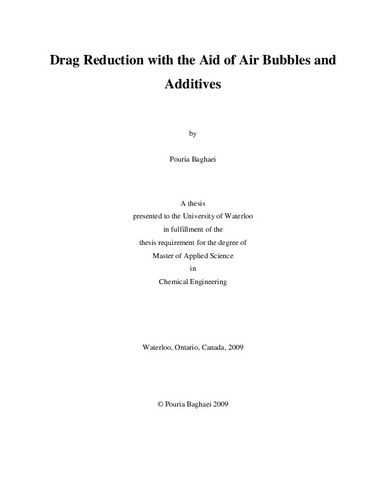 The effect of additives on friction loss in upward turbulent flow was investigated in this experimental study. Additives such as air bubbles, frother and polymer were added to water flow to study their influence on the friction factor. In order to perform this research an experimental set-up was designed and developed. The test sections of the set-up consisted of three vertical pipes of different diameters. The set-up was equipped with three pressure transducers, a magnetic flowmeter, gas spargers and a gas rotameter. The first phase of the experimental program involved calibration of the various devices and pipelines test-sections. The single-phase pressure loss data obtained from the pipelines exhibited good agreement with the standard equations. The second phase of the experimental program dealt with the effect of air bubbles and additives (frother and polymer) on drag reduction in turbulent flows. The experimental results showed that bubbles in the range of 1 mm-3 mm increased the wall shear stress. Therefore, no drag-reduction effect was observed. On the contrary, a significant increase in friction factor was observed at low Reynolds numbers as a result of larger bubble sizes and lower turbulence intensities. The friction factor at low Reynolds numbers could be decreased by decreasing the bubble size by addition of frother to the flow system. The combination of polymer and air bubbles showed a drag reduction of up to 60%. It is also evident from the experiment results that the addition of polymer to bubbly flow system leads to fully homogeneous mixture.