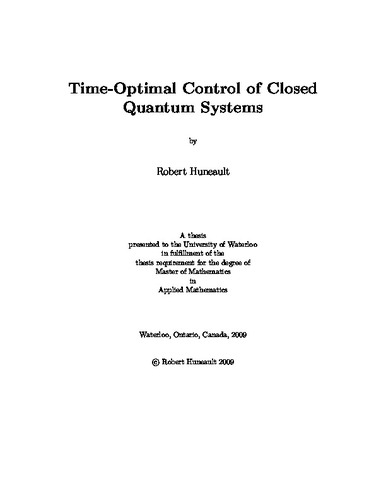 Recently there has been a lot of interest in the potential applications of performing computations on systems whose governing physical laws are quantum, rather than classical in nature. These quantum computers would have the ability to perform some calculations which would not be feasible for their classical counterparts. To date, however, a quantum computer large enough to perform useful calculations has yet to be built. Before this can be accomplished, a method must be developed to control the underlying quantum systems. This is a problem which can naturally be formulated in the language of control theory. This report outlines the basic control-theoretic approach to time-optimally controlling quantum systems evolving under the dynamics of the Schr\"{o}dinger operator equation. It is found that under the assumption of non-singularity, the controls which produce time-optimal trajectories are bang-bang. With this in mind, a switching time algorithm is implemented to find optimal bang-bang controls.