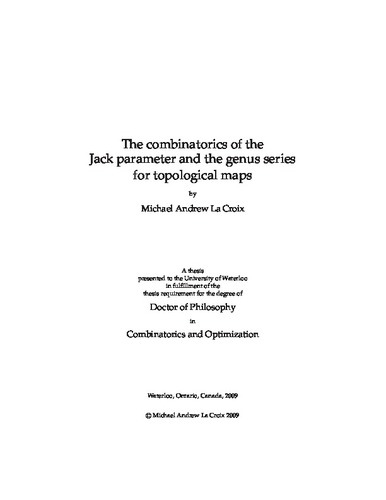 Informally, a rooted map is a topologically pointed embedding of a graph in a surface. This thesis examines two problems in the enumerative theory of rooted maps. The b-Conjecture, due to Goulden and Jackson, predicts that structural similarities between the generating series for rooted orientable maps with respect to vertex-degree sequence, face-degree sequence, and number of edges, and the corresponding generating series for rooted locally orientable maps, can be explained by a unified enumerative theory. Both series specialize M(x,y,z;b), a series defined algebraically in terms of Jack symmetric functions, and the unified theory should be based on the existence of an appropriate integer valued invariant of rooted maps with respect to which M(x,y,z;b) is the generating series for locally orientable maps. The conjectured invariant should take the value zero when evaluated on orientable maps, and should take positive values when evaluated on non-orientable maps, but since it must also depend on rooting, it cannot be directly related to genus. A new family of candidate invariants, η, is described recursively in terms of root-edge deletion. Both the generating series for rooted maps with respect to η and an appropriate specialization of M satisfy the same differential equation with a unique solution. This shows that η gives the appropriate enumerative theory when vertex degrees are ignored, which is precisely the setting required by Goulden, Harer, and Jackson for an application to algebraic geometry. A functional equation satisfied by M and the existence of a bijection between rooted maps on the torus and a restricted set of rooted maps on the Klein bottle show that η has additional structural properties that are required of the conjectured invariant. The q-Conjecture, due to Jackson and Visentin, posits a natural combinatorial explanation, for a functional relationship between a generating series for rooted orientable maps and the corresponding generating series for 4-regular rooted orientable maps. The explanation should take the form of a bijection, ϕ, between appropriately decorated rooted orientable maps and 4-regular rooted orientable maps, and its restriction to undecorated maps is expected to be related to the medial construction. Previous attempts to identify ϕ have suffered from the fact that the existing derivations of the functional relationship involve inherently non-combinatorial steps, but the techniques used to analyze η suggest the possibility of a new derivation of the relationship that may be more suitable to combinatorial analysis. An examination of automorphisms that must be induced by ϕ gives evidence for a refinement of the functional relationship, and this leads to a more combinatorially refined conjecture. The refined conjecture is then reformulated algebraically so that its predictions can be tested numerically.

Michael Andrew La Croix (2009). The combinatorics of the Jack parameter and the genus series for topological maps. UWSpace. http://hdl.handle.net/10012/4561