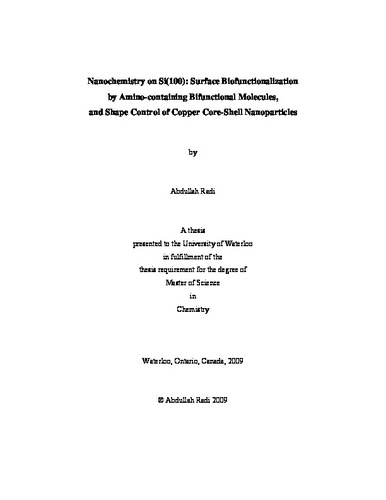 The present research involves two projects: a surface science study of the room-temperature adsorption and thermal evolution of allylamine and ethanolamine on Si(100)2×1, studied by using temperature-dependent X-ray photoelectron spectroscopy (XPS) and thermal desorption spectrometry (TDS), as well as Density Functional Theory (DFT) calculations; and a materials science study on the shape control of copper nanoparticles (Cu NPs) deposited on H-terminated Si(100) substrate with an extended size regime of 5-400 nm, by using a simple, one-step electrochemical method. The Cu NPs of three primary shapes were characterized with scanning-electron microscopy (SEM), glancing-incidence X-ray diffraction (GIXRD) and XPS. In the first surface science study, the presence of broad N 1s XPS features at 398.9-399.1 eV, corresponding to N–Si bonds, indicates N–H dissociative adsorption for both allylamine and ethanolamine on Si(100)2×1. For allylamine, the presence of C 1s features at 284.6 eV and 286.2 eV, corresponding to C=C and C−N, respectively, and the absence of the Si−C feature expected at 283.5 eV show that the reactions involving the ethenyl group such as the [2+2] C=C cycloaddition or those producing the [N, C, C] tridentate adstructures do not occur at room temperature. For ethanolamine, the O 1s feature at 533.1 eV indicates the formation of Si−O bond and O−H dissociation, which confirms an [O, N] bidentate adstructure and excludes the N−H and O−H dissociation unidentate structures. These XPS data are consistent with the N−H unidentate, and N−H and O−H double dissociation [O, N] bidentate adstructures for allylamine and ethanolamine, respectively, as predicted by the DFT calculations. TDS and temperature-dependent XPS data further show the desorption of propene and ethylene at 580 K and of acetylene at 700 K for allylamine and the desorption of ethylene at 615 K for ethanolamine, while the lack of N- or O-containing desorbates suggests that the dissociated N and O species are likely bonded to multiple surface Si atoms or diffused into the bulk at elevated temperatures (as confirmed by the corresponding temperature-dependent XPS spectra). Unlike the multidentate allyl alcohol and allylamine adstructures that have been found to be not favored kinetically, the present [O, N] bidentate ethanolamine adstructure appears to be kinetically favored on Si(100)2×1. In the second materials science study, Cu NPs of three primary shapes have been deposited on H-terminated Si(100) by a simple, one-step electrochemical method. By precisely manipulating the electrolyte concentration [CuSO4.5H2O] below their respective critical values, cubic, cuboctahedral, and octahedral Cu NPs of ranges of average sizes and number densities can be easily obtained by varying the deposition time. Combined GIXRD and depth-profiling XPS studies show that these Cu NPs have a crystalline core-shell structure, with a face-centered cubic metallic Cu core and a simple cubic Cu2O shell with a CuO outerlayer. The shape control of Cu NPs can be understood in terms of a progressive growth model under different kinetic conditions as dictated by different [CuSO4.5H2O] concentration regimes. The two studies in the present work lay the foundation for future investigation of surface biofunctionalization of these fascinating Cu NPs with different shapes and therefore different surface chemistries as controlled by the relative amounts of the (100) and (111) facets, and their boundaries.