Provocation of the Non-Place [A Place for Alienation] 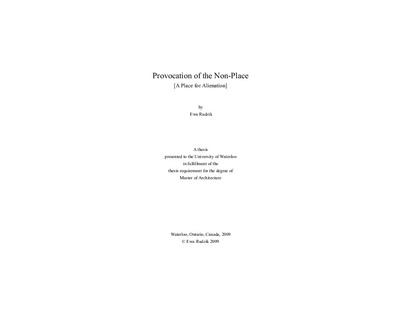 The “non-place” is a term used by author Marc Augé to describe a place that is itself not a destination but rather a place of everyday passing, a place of being in-between in which he critically claims we experience alienation. The thesis uses his definition of the non-place to describe Union Station as a threshold into the city, a place of passing in which there is an undeniable sense of alienation. Yet the thesis is critical of Augé’s inadequacy to describe and capture the essential meaning of the non-place, and the significance of its alienation, as he ultimately only describes the conditions particular to our capitalist structures leading to globalization and which though in effect dominate its experience, are nonetheless not of its essence. The thesis turns to social theorist Siegried Kracauer’s text on the “hotel lobby” to truly grasp an understanding of the non-place phenomenon as a place of ambiguity, of infinite possibility out of which we in part choose how to structure relations in society. The ambiguity which Kracauer describes liberates understanding of the non-place from its economic grasp and allows it to be considered as a place where many different relationships can take place with many different structures. Different ways for the conscious city to structure relations in the non-place are investigated. First interpretive narratives identify the structures by which we experience alienation in Union Station’s monumental head house, underground concourses and platforms. Then, similar structures are found in different sites of Toronto where they are reconsidered from a perspective based on connectivity. Various interventions expressed through drawings, photographs and text explore how to re-negotiate these structures through an architectural language that enables instead of denies the experience of contact. The thesis concludes that the ability to create connections is contingent on the ability to accept the unknown and face the fear of things we cannot control. The final design considers the non-place as a place where this paradox can be embodied and its significance drawn out. It proposes to renovate, develop and expand Union Station as an architectural agent of otherness. Responding to the current political crisis which Augé alludes to, the thesis turns the diagram of his argument inside out by providing a resolution to alienation in an architectural expression of its acceptance. Extending upon the ability to engage with new things and be open to deeper connections, at Union Station Toronto can integrate into its fabric a sense of the unknown and include an existential awareness of the outside. A non-place that architecturally manifests its meaning as a place of ambiguity instills a sense of infinite possibility; it becomes a place where we can confront our fears — begin to transcend them — place ourselves at the edge and prepare to experience what is outside our boundaries.