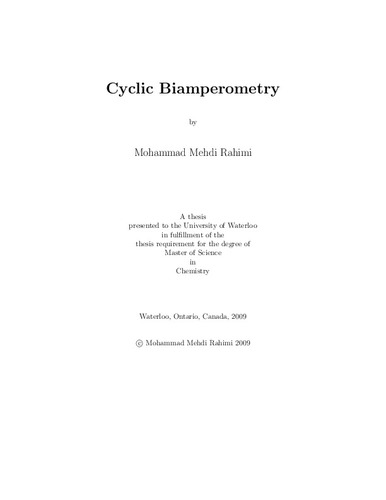 In this thesis, cyclic biamperometry (CB) as a new method in electrochemistry, has been introduced and investigated. The hallmark of this method is the absence of a reference electrode which potentially allows simplification and miniaturization of the measurement apparatus. Similarities and differences of this method and cyclic voltammetry (CV) have been studied and it was shown that under conditions of using standard electrodes, CB has a better sensitivity and a lower detection limit than CV. A new equivalent circuit model for the cell has been proposed and parameters affecting the sensitivity of CB, such as keeping the concentration of one redox species in excess and having a larger W2 electrode, have been described. The redox cycling effect in biamperometric systems has been investigated and it is shown that improvements of at least two orders of magnitude in sensitivity can be achieved by using interdigitated electrodes (IDEs). In addition, an example for applications of this method, including biamperometric dead-stop titration of 1-naphthol with ferricyanide, has been presented and possible fields in which CB can be incorporated (e.g. monitoring the activity of alkaline phosphatase) have been illustrated. Finally, a few suggestions for future studies and further improvements have been outlined.