Climate Change Vulnerability of the US Northeast Ski Sector: a multi-methods systems-based approach 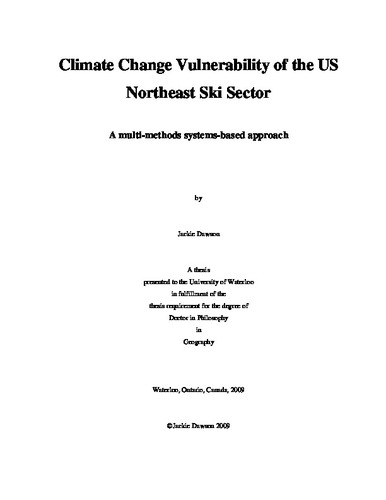 In its Fourth Assessment Report (AR4), the Intergovernmental Panel on Climate change estimated that global mean temperature will increase between 1.8 to 4.0°C by the end of the 21st century. An increase in global temperature by even a few degrees could have significant environmental and economic impacts, and mean that economic sectors that are better able to adapt to a changing climate will prosper, and those that are not may decline, relocate or disappear. Traditional resource sectors, which are highly reliant on environmental conditions, such as agriculture and forestry have been considering the implications of climate change for several decades. The tourism sector, which is also highly reliant on environmental factors, has only begun to consider the possible impacts of climate change over the past five to seven years. The integrated effects of a changing climate are anticipated to have far-reaching consequences for the rapidly growing global tourism economy and the communities that rely on the sector. In fact, the United Nations World Tourism Organization [UNWTO], United Nations Environment Program [UNEP] and World Meteorological Organization [WMO] identified climate change as the ‘greatest challenge to the sustainability of the global tourism industry in the 21st century’. The winter tourism sector has been repeatedly identified as vulnerable to climate change due mainly to the high susceptibility of mountain environments and the projected reduction in natural snow availability. The international ski industry has received the most detailed attention because of the sector’s high cultural and economic importance in many regions. The multi-billion dollar ski sector is highly vulnerable to changes in both regional and local climate and as a result has been projected to experience decreased natural snow reliability resulting in decreased season length, increased snowmaking requirements, increased operating costs, and decreased revenues in association with decreased visitation. The overarching goal of this dissertation is to examine climate change vulnerability (see glossary of terms, p. xi) (both- supply and demand-sides) for the entire US Northeast ski tourism sector in order to understand how the regional marketplace, as a whole, is likely to change in response to projected climate change. Previous research has been piecemeal in its approach (i.e. examining either supply or demand) and has largely neglected to examine climate change vulnerability of the ski sector from a systems-based perspective (i.e. examining both supply and demand for a single marketplace). Understanding how the US Northeast ski area marketplace may contract under climate change conditions including how ski area competitors may fair under future conditions, and how demand-side behavioural response is likely to occur, would allow ski area operators and managers to develop and implement appropriate adaptation strategies that can help reduce the negative impacts of change while taking advantage of any opportunities. The research revealed that there is likely to be a contraction of ski area supply, which favours those ski areas that are able to afford the increased cost of adapting to projected changes in climatic conditions. Ski areas that are situated at higher elevations or are located in the northern portion of the Northeast region, were found to be at an advantage due to lower temperatures and more precipitation falling as snow. Ski areas in Vermont, New Hampshire, Maine, and northeastern New York were projected to maintain longer season lengths, require less snowmaking and be more likely to be operational during the economically important Christmas-New Year holiday than ski areas in Connecticut or Massachusetts. The extent to which skiers intend to change their skiing behaviour in response to the projected impacts on ski area supply were not significantly greater than the extent to which they already change their skiing habits when current conditions are poor. This suggests that the future response to climate change is likely to be similar to that which has been observed during marginal snow conditions of the past, and that demand for skiing opportunities is not likely to reduce proportionally to the expected reduction in supply. In which case, the ski areas that are able to remain operational under projected climate change, may be able to take advantage of a possible geographic market shift (i.e. greater demand/market share for ski areas that remain). If there is a net transfer of demand throughout the remaining marketplace, it would mean that some communities would need to prepare for development pressures (e.g. water use for snowmaking, real estate development, slope expansion, congestion) associated with the concentration of ski tourism in fewer areas, while others would need to prepare for economic diversification and investment in alternative industries (i.e. adapted snow-based industry or non-snow-based industry).