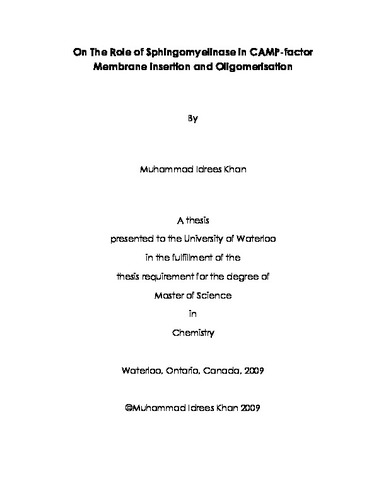 ABSTRACT CAMP factor is a 25kDa extracellular protein from Streptococcus agalactiae (Group B streptococci) that contains 226 amino acid residues. CAMP factor has been characterized as a pore-forming toxin (PFT). The typical mechanism of pore formation of PFTs involves three main stages, namely binding of toxin monomers to the membrane surface, oligomerization of the monomers on the cell membrane, and finally the insertion of oligomers into the membrane. This study focused on second stage, and investigates the oligomerisation of CAMP factor on sheep red blood cell membranes. It is known that the hemolytic activity of CAMP factor is greatly enhanced by interaction with sphingomyelinase from Staphylococcus aureus. We here focused on understanding the role of sphingomyelinase in the oligomerisation step. Experimental data were obtained using Förster resonance energy transfer (FRET) studies. The fluorescence dyes IAEDANS and Fluorescein-5-maleimide were used as donor/acceptor fluorophores and attached to mutant single cysteine residues in CAMP factor. Samples of donor- and acceptor-labelled protein were mixed and incubated with red cell membranes that had or had not been pre-treated with sphingomyelinase. Energy transfer was monitored with time-resolved and steady-state fluorescence measurements. In the time-resolved experiments, the fluorescence lifetime of the donor was measured in the presence and the absence of the acceptor, on membrane samples that were or were not treated with sphingomyelinase. We observed a decrease in the fluorescence lifetime of the donor with the presence of the acceptor. The decrease in lifetime due to acceptor interaction signifies the occurrence of energy transfer between the donor and acceptor fluorophores, which indicates proximity due to oligomerisation of the CAMP factor protein on the cell membrane. This was only observed when the membranes had been treated with sphingomyelinase. When membranes were used that had not been treated with sphingomyelinase, the donor lifetimes are very low, suggesting the inability of the CAMP factor to undergo membrane insertion and oligomerisation.

Muhammad Khan (2009). On The Role of Sphingomyelinase in CAMP-factor Membrane insertion and Oligomerisation. UWSpace. http://hdl.handle.net/10012/4548