The Involvement of Business Improvement Areas in Tourism: An Exploratory Study of Ontario BIAs 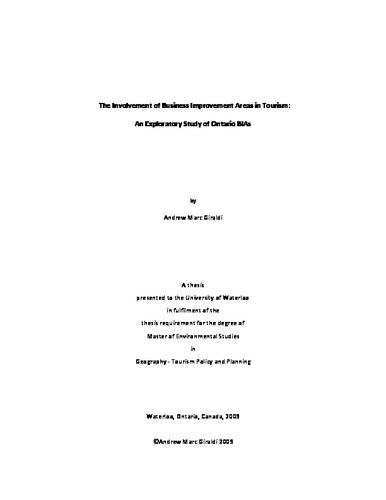 Local festivals and cultural events, signage and streetscape improvements, and regional marketing efforts indicate that tourism is present in some Business Improvement Areas (BIAs). However, the extent and form of this relationship has never before been examined in the North America context. The purpose of this thesis is to explore the involvement of Ontario’s BIAs in tourism. It reports on the findings of a 2008 province-wide survey of approximately 260 BIAs, touching on a variety of topics, including: the proportion of BIAs that are involved in tourism, the factors prompting them to attract tourists, the ways that they promote themselves to tourists, the types of tourism experiences that they offer, the positive and negative impacts of their tourism efforts, and whether they partner with other stakeholders in tourism promotion efforts. The data are then used to propose a typology of Business Improvement Areas showing differing levels and forms of tourism involvement. The thesis concludes by considering four case studies of successful tourism-oriented BIAs (Downtown Kingston, Downtown London, Downtown Yonge and Creemore), which are examined to identify the characteristics that have led to their success. The findings show that the majority of Ontario’s Business Improvement Areas are involved in tourism, using diverse methods to promote themselves as destinations. Their tourism offering usually includes special events and festivals, but can also involve investments in other attractions. Although BIAs are aware of both positive and negative impacts from tourism, tourism management efforts are uncommon. Seven characteristics of successful tourism-oriented BIAs are identified: innovation, self-awareness, appearance, attractions, partnerships, experiences, and planning. BIAs that strongly manifest these characteristics are believed to be likely candidates to benefit from the tourism industry.