Investigation of Sf-9 Cell Metabolism Before and After Baculovirus Infection Using Biovolume: a Case for the Improvement of Adeno-Associated Viral Vector Production 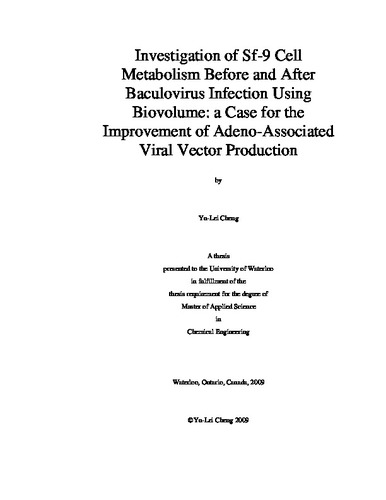 Adeno-associated viral (AAV) vectors have been shown to be potential vectors for the treatment of diseases, including protocols using RNA interference (RNAi). AAV vector production in insect cells using the baculovirus vector expression system has been a major advance in furthering their use. A major limitation of AAV vector production at high cell densities is a reduction in cell specific yield, which is thought to be caused by nutrient limitations. Nutrient consumption profiles after infection, however, have still not been fully characterized, probably due to the difficulty of characterizing consumption patterns based on increases in cell density, which are minimal after infection. It is known, however, that cells increase in size after infection; therefore, the driving hypothesis of this thesis was that biovolume, or the total volume enclosed by the membrane of viable cells, which accounts for both cell density and cell size, could be used to characterize nutrient consumption patterns both before and after infection. The relationships between nutrient consumption and change in cell density and biovolume were examined by statistical correlation analysis. It was found that in uninfected cultures, no significant correlation differences, using either cell density or biovolume, were observed since cell size remained relatively constant; however, in infected cultures, more than half of the nutrients were found to be better correlated with biovolume than with cell density. When examining the nutrient and metabolite concentration data on a biovolume basis, nutrient consumption remained relatively constant. It is hypothesized that since it has been reported that the rate of cell respiration increases after infection, a more complete oxidation of nutrients occurs to satisfy increased energy needs during infection. By having a basis to base nutrient consumption, we can better assess the needs of the culture. This will allow the development of feeding strategies based on cellular requirements instead of supplying the cultures with generic nutrient cocktails. It is expected that different nutrient mixtures can be used to target different goals such as 1) enhancing cell growth (before infection) and 2) improving the production of recombinant products (after infection). This will not only increase the efficiency of AAV vector production, but will also reduce the cost of production and make the process more economical by eliminating the addition of unnecessary nutrients. Although promising, some limitations of using biovolume still exist. A first limitation is the biovolume measure itself. This measure requires a device that measures cell size, such as a Coulter Counter Multisizer (Beckman-Coulter, Miami, FL, USA), which can be expensive. Capacitance probes can be a more cost effective tool to estimate biovolume; however, the availability of capacitance probes is still not common. A second limitation is the interpretation of the biovolume profiles, which can depend strongly on the fraction of cells in culture that are infected. If the culture is infected asynchronously, then there will be many different cell populations in the culture. Future work may require separating the cell size distribution into populations of viable and non-viable cells to get a better biovolume measure as opposed to assuming that viability is well distributed over the entire range of cell sizes. In infected cultures where the viability may be low, it is likely that the cell size distribution of non-viable cells will be concentrated at the lower end of the distribution (smaller diameter) rather than being well distributed over the whole range. If this is the case, for the infected cultures with low viability, the mean cell diameter calculated will be underestimated, which will lead to an overestimation of nutrient consumption for cultures with low viability. This will certainly affect the accuracy of the nutrient consumption profiles. By separating cell size distribution data into different cell populations of viable and nonviable, the accuracy can be improved.

Yu-Lei Cheng (2009). Investigation of Sf-9 Cell Metabolism Before and After Baculovirus Infection Using Biovolume: a Case for the Improvement of Adeno-Associated Viral Vector Production. UWSpace. http://hdl.handle.net/10012/4540