Investigating the efficacy of the NASA fluid loading protocol for astronauts: The role of hormonal blood volume regulation in orthostasis after bed rest 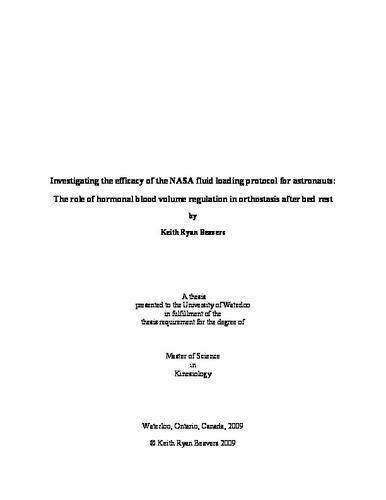 Despite years of research, the role that hypovolemia plays in orthostatic intolerance after head down bed rest (BR) and spaceflight remains unclear. Additionally, the efficacy of oral saline countermeasures, employed in an attempt to restore plasma volume (PV) after BR is questionable. Several previous studies have suggested that a new homeostatic set point is achieved in space or during BR, making attempts to restore PV temporary at best. We tested the hypotheses that one day of BR would induce a transient increase in PV followed by hypovolemia and new hormonal balance; that a salt tablet and water fluid loading (FL) countermeasure would be ineffective in restoring PV; and also that the FL would not attenuate the exaggerated hormonal responses to orthostatic stress that are expected after 28hr of BR. Plasma volume, serum sodium and osmolarity, and plasma ANP, AVP, renin, angiotensin II, aldosterone, and catecholamines were measured in nine male subjects undergoing 5 different protocols (28hr Bed Rest without Fluid Loading = 28NFL, 28hr Bed Rest with Fluid Loading = 28FL, 4hr Seated Control = 4NFLS, 4hr Seated Control with Fluid Loading = 4FLS, and 4hr Bed Rest = 4BR) in a randomized repeated measures design. The FL countermeasure was 15 ml/kg of body weight of water with 1g of NaCl per 125ml of water. Orthostatic testing by lower body negative pressure (LBNP) was performed before and after all protocols. In agreement with our first hypothesis, we observed transient reductions in renin, angiotensin II, and aldosterone, which after 25.5hr were restored to baseline, slightly augmented, and suppressed, respectively. Also after 25.5hr, PV was reduced in the 28hr BR protocols and was not restored in 28FL; however, the FL protocol increased PV during 4FLS. We additionally observed augmented renin and aldosterone responses, as well as generally elevated angiotensin II after 28NFL, but not after 28FL or any of the 4hr protocols. Furthermore, no changes in plasma norepinephrine responses to LBNP were documented from Pre-Post test in any protocol. Our results indicate that: 1) PV is reduced after short term BR and is not restored by an oral FL; 2) renin-angiotensin-aldosterone system (RAAS) responses to orthostatic stress are augmented after 28hr of BR and the amplified response can be abrogated by FL; and 3) plasma norepinephrine responses during orthostatic stress are not affected by BR or FL, suggesting that RAAS activity may be modulated by FL independently of sympathetic activity and PV during orthostasis after bed rest.