A study of Nanofilled Silicone Dielectrics for Outdoor Insulation 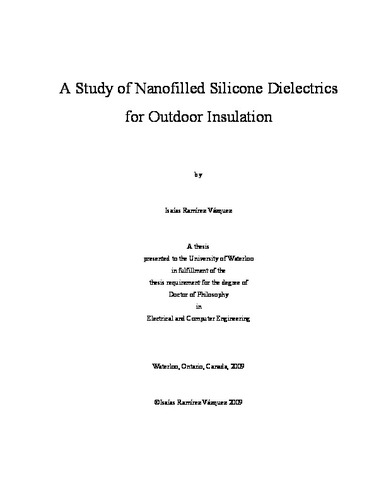 Polymeric insulators are now a common replacement for conventional porcelain and glass string insulators on overhead distribution and transmission lines. The use of this mature technology represents many advantages to the utilities; however, in polluted environments and those with high moisture levels in the environment, electrical discharges will develop on the surface of the insulation. In the long term, electrical discharges cause degradation of the polymer insulation in the form of electrical tracking and material erosion, and both are detrimental to the life of the insulation. Inorganic fillers are added to polymer materials to make the insulation more resistant to discharges, and at the same time, to lower the cost of the insulation. However, there is a limit to the amount of filler that can be added as the processability of the polymer compound becomes extremely difficult and expensive. Microfillers are extensively used to modify the physical properties of the polymeric matrix, and the properties of these composites are well known. On the other hand, nanofillers are being used in some insulating composites for reinforcement of mechanical properties; their electrical characteristics have shown inconsistency in the literature, and this is attributable to the non-uniformity of the filler dispersion. Most researchers agree that particle dispersion is critical in the development of nanocomposites for electrical insulation applications. If the nanoparticles are well dispersed, the electrical properties of these materials will be significantly improved. The main problem in using nanofillers is that the nanoparticles agglomerate easily because of their high surface energy, such that conventional mixing techniques are unable to break apart the nanoparticle aggregates. A secondary problem is the incompatibility of the hydrophobic polymer with the hydrophilic nanoparticles which results in poor interfacial interactions. In this thesis, the reinforcement of a silicone rubber matrix is successfully accomplished with the combination of microfiller, nanofiller, and a commercial surfactant. To improve particle dispersion, several techniques are available apart from mixing. This includes surface modification of the nanoparticles by chemical and physical methods by using surfactants. While surfactants are commonly applied to liquids, their use to disperse nanoparticles in compositions forming solid dielectric materials has not yet been reported. The findings in this thesis have shown that Triton X-100, a common surfactant, significantly aids in the dispersion of nanosilica and nanoalumina in silicone rubber. The main advantage of the surfactant is that it lowers the surface energy and the interfacial tension of the nanoparticles. This reduces agglomeration and facilitates the separation of the particles during mixing, thereby allowing improved dispersion of the nanofillers, as observed through Scanning Electron Microscopy (SEM). However, also shown in the thesis is that Triton X-100 cannot interact efficiently with all types of nanofillers. A high concentration of surfactant can also compromise the adsorption of the matrix polymer chains on the filler particles, so it is necessary to establish a balance between matrix adsorption and the dispersion of the particles. Mechanical properties such as the tensile strength, elongation at break, and hardness may also suffer from the use of excess surfactant. In addition, excess surfactant can lead to surface wetting properties different from composites containing none. Better wetting due to the migration of excess surfactant to the surface of the silicone may favour arcing in a wet environment. The current investigation shows that for a specific filler and concentration, an optimal concentration of surfactant provides good erosion resistance without adversely affecting the mechanical characteristics of the nanocomposite. Stress–strain and hardness measurements are done to investigate the surfactant’s effect on the mechanical properties of the composites. The effect of the surfactant on the surface of the composites is analyzed with static contact angle measurements. The heat resistance of nanofilled silicone rubber is explored using an infrared laser simulating the heat developed by dry-band arcing. Also, several industry standard test methods such as salt fog and inclined plane tests are used to evaluate the erosion resistance of the filled composites. The results of all three tests confirm that the combination of microfiller and nanofiller with surfactant results in composites with improved erosion resistance to dry band arcing, with the exception of the case where calcinated filler is used in the formulation. In this thesis, the thermal conductivity is measured using a standard ASTM method and calculated using several theoretical, semi-theoretical, and empirical models. A thermal model developed in COMSOL Multiphysics and solved using a finite element method (FEM) shows a temperature distribution in the modelled nanocomposites which is comparable to the temperature distribution measured with an infrared camera under laser heating. In addition, this investigation aims to define the mechanism by which the nanofillers improve the heat and erosion resistance of the silicone composites. In order to understand this mechanism, nano fumed silica, nano natural silica, and nano alumina are used in a silicone rubber (SiR) matrix in order to study the thermally decomposed silicone and the residual char that is formed during laser ablation tests. The white residue remaining after laser ablation on the surface of composites with fumed silica, natural silica, and alumina is analyzed in a number of ways. Scanning Electron Microscopy, Energy Dispersive X-ray analysis (EDAX), and X-ray diffraction (XRD) techniques are used to analyze the thermally decomposed silicone residue after laser heating indicating that the protective mechanism of the three analyzed nanofillers – fumed silica, natural silica, and alumina – appears to be the same. The formation of a continuous layer on the surface behaves as a thermal insulator protecting the material underneath from further decomposition.