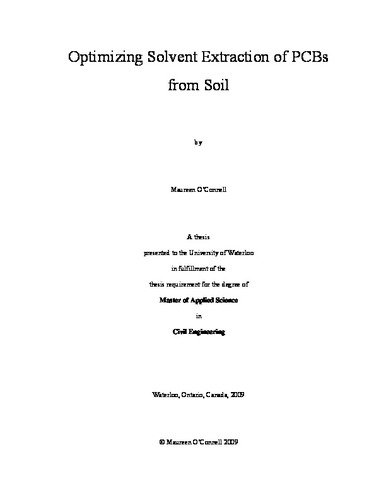 Polychlorinated biphenyls (PCBs) are carcinogenic persistent contaminants. Although their manufacturing in North America ceased in the late 1970s, their high heat resistance made their use widespread over their production lifetime. As a result, PCB contamination has occurred globally and in particular has plague brownfield redevelopment in urban environments. The remediation of PCB contaminated soil or sediments has historically been dealt with through the expensive and unsustainable practice of excavation followed by off-site disposal or incineration. One potential technology that has shown some success with on-site remediation of PCB contamination is solvent extraction. Solvent extraction is technically simple; it involves excavating the contaminated soil, placing it in a vessel and adding solvent. The PCBs are extracted by the solvent and the treated soil is returned for use on site. Although successful at removing a large quantity of PCBs from some soils, this technology can be improved upon by extracting additional PCB mass and making the extraction more efficient and suitable for colder climates. This thesis aimed to identify the factors controlling PCB extraction with solvents in order to optimize PCB extraction as it is applied on different soil types and in various climates. The research investigated the impact of elevated moisture contents (≤ 20% by weight) on solvent extraction efficiency, the effects of low temperatures (<5ºC) on solvent extraction, and developed a kinetic model to represent PCB solvent extraction. As past research has shown, weathered PCB in soil is more difficult to remove. Contaminated field samples from Southern Ontario, Canada were used for this work, rather than synthetically prepared samples. The impact of elevated moisture contents and low temperature on extraction efficiency was determined through a series of screening experiments using polar and non-polar solvents at both 20ºC and 4ºC. It was hypothesized that improved extractions may be possible with combinations of polar and non-polar solvents. Based on the results of these screening experiments, a factorial experiment was designed using solvent combinations to further assess the role of moisture contents and low temperatures. The role of PCB mass distribution among grain sizes was also evaluated to see if optimization based on grain size separation is possible. Finally, experiments were performed to generate data suitable for the development of a kinetic model that incorporates key factors affecting solvent extraction. Four suitable solvents for solvent extraction in Ontario were identified through a literature review and these were used for this work: isopropyl alcohol (polar), ethanol (polar), triethylamine (non-polar) and isooctane (non-polar). Triethylamine outperformed isooctane and performed best on its own rather than in combination with polar solvents. An interaction between soil moisture content and choice of polar solvent (isopropyl alcohol versus ethanol) was established: a given polar solvent achieves optimal PCB extraction at a specific moisture content range. Temperature was also identified as significantly influencing PCB extraction. Although it was determined that PCBs were distributed unevenly amongst grain sizes, a simple relationship between grain size and fractional organic carbon or organic content was not found. A simple two-compartment kinetic model was developed which is suitable for predicting the PCB concentrations extracted up to 24 hours. The model incorporates both temperature and soil to solvent ratio in order to estimate PCB concentration extracted.