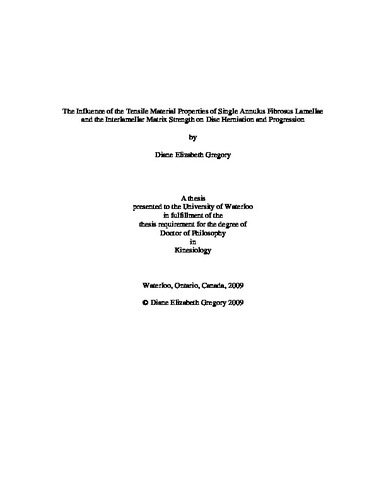 Low back pain is highly prevalent in the developed world, with 80% of the population being affected at some point in their lives. Herniation, a common injury to the intervertebral disc, is characterized as the posterior migration of the nucleus pulposus through the layers of the annulus fibrosus. Various risk factors have been associated with the development of disc herniation, but the mechanisms are largely not understood. For example, exposure to vibration has been linked to the occurrence of herniation, yet our understanding of this association is not clear. It is hypothesized that vibration cyclically loads the tissues of the intervertebral disc until failure occurs as a result of fatigue. Tissues at risk of fatigue failure may include the intra-lamellar matrix, the connective tissue found between collagen fibres within a single lamella, and the inter-lamellar matrix, the connective tissue found between adjacent lamellae. In order to determine the mechanistic link between vibration and herniation, a firm understanding of the properties of the intervertebral disc as well as the intra and inter-lamellar matrices are of utmost importance. Further, it is important to determine these properties under physiological loading scenarios. This thesis consists of five studies, which have each provided a unique piece to the intervertebral disc herniation puzzle in order to better understand this mechanistic link. First, it was discovered that annular tissue is subject to significantly higher stresses and is stiffer under biaxial strain as compared to uniaxial strain. Biaxial strain is more representative of the in vivo loading scenario and provides more accurate information regarding scenarios that the annulus can tolerate and those that can result in injury. It was also revealed that, when strained at physiological strain rates (up to 4%/sec), these mechanical properties do not change such that they are independent of strain rate. Therefore, when strained at varying rates akin to voluntary movement, the annulus is not subject to higher stresses or altered stiffness. Second, the effect of vibration, an acknowledged risk factor for herniation, was examined on the mechanical properties of the intra and inter-lamellar matrices. It was discovered that vibration altered these matrices such that they were more extensible and strained to greater magnitudes, yet did not reach higher stresses before failing. It was hypothesized that this increased extensibility was due to damage to elastin, as elastin assists in minimizing tissue deformation and helps tissues recover from tensile strain. The final study assessed the effect of exposure to vibration on the development of disc herniation. The initiation of herniation was observed in a significantly greater number of intervertebral discs exposed to vibration as compared to a control condition. Although epidemiological studies had documented a correlation between exposure to vibration and herniation, this was the first study to conclude that exposure to vibration is in fact a mechanical risk factor for the development of herniation and increases the incidence of herniation. Further, based on the findings of the mechanical properties of the intra and inter-lamellar matrices, and in particular the observed 15-20 times greater failure strength of the intra as compared to inter-lamellar matrix, it would appear that the inter-lamellar matrix, and thus delamination, may be the weakest link in the herniation pathway. This thesis has uncovered new information regarding physiological mechanical properties of the annulus. Further, new information regarding the intra and inter-lamellar matrices was obtained, improving our understanding of the healthy disc. Last, by subjecting the disc to a known risk factor for herniation, hypotheses were generated regarding the initiation and progression of disc herniation, specifically related to the roles of the intra and inter-lamellar matrices.