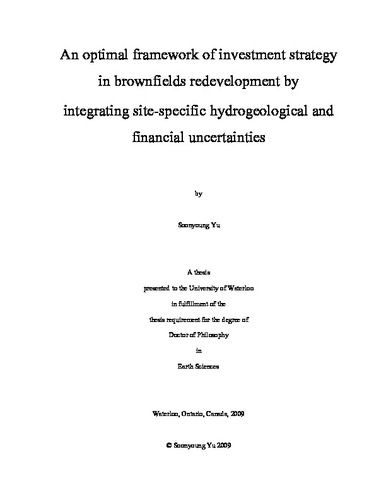 Brownfields redevelopment has been encouraged by governments or the real estate market because of economic, social and environmental benefits. However, uncertainties in contaminated land redevelopment may cause massive investment risk and need to be managed so that contaminated land redevelopment is facilitated. This study was designed to address hydrogeological as well as economic uncertainty in a hypothetical contaminated land redevelopment project and manage the risk from these uncertainties through the integration of the hydrogeological and economic uncertainties. Hydrogeological uncertainty is derived from incomplete site information, including aquifer heterogeneity, and must be assessed with scientific expertise, given the short history of redevelopment projects and their unique hydrogeological characteristics. Hydrogeological uncertainty has not yet been incorporated in one framework with the economic uncertainty that has been relatively well observed in financial markets. Two cases of Non-Aqueous Phase Liquid (NAPL) contamination were simulated using a physically-based hydrogeological model to address hydrogeological uncertainty: one concerns the effect of an ethanol spill on a light NAPL (LNAPL) contaminated area in the vadose zone, and the other is regarding the vapour phase intrusion of volatile organic compounds, in particular, Trichloroethylene (TCE), a dense NAPL (DNAPL), into indoor air through a variably saturated heterogeneous aquifer. The first simulation replicated experimental observations in the laboratory, such as the capillary fringe depressing and the NAPL pool remobilizing and collecting in a reduced area exhibiting higher saturations than observed prior to an ethanol injection. However, the data gap, in particular, on the chemical properties between the model and the experiment caused the uncertainty in the model simulation. The second NAPL simulation has been performed based on a hypothetical scenario where new dwellings in a redeveloped area have the potential risk of vapour phase intrusion from a subsurface source into indoor air because remediation or foundation design might fail. The simulation results indicated that the aquifer heterogeneity seemed the most significant factor controlling the indoor air exposure risk from a TCE source in the saturated zone. Then, the exposure risk was quantified using Monte Carlo simulations with 50 statistically equivalent heterogeneous aquifer permeability fields. The quantified risk (probability) represents the hydrogeological uncertainty in the scenario and gives the information on loss occurrence intensity of redevelopment failure. Probability of failure (or loss occurrence intensity) was integrated with cost of failure (or loss magnitude) to evaluate the risk capital in the hypothetical brownfields redevelopment project. The term “risk capital” is adopted from financial literature and is the capital you can lose from high risk investment. Cost of failure involves economic uncertainty and can be defined based on a developer’s financial agreement with new dwellers to prevent litigation in the case of certain events, such as an environmental event where indoor air concentrations of pollutants exceed regulatory limits during periodic inspections. The developer makes such a financial agreement with new dwellers because new dwellings have been constructed founded on flawed site information, and municipalities may require it if a land use planning approval is required. An agreement was presumed that the developer would repurchase the affected houses from new dwellers immediately, if indoor air contamination exceeded the regulatory limit. Furthermore, the developer would remediate any remaining contamination, demolish the affected houses and build new houses if they were worth investing in. With this financial plan assumed, the stochastic housing price, stochastic inflation rate and stochastic interest rate have been considered to cause the uncertainty in the cost of failure, and the information on these stochastic variables was obtained from the financial market due to its long history of observations. This research reviewed appropriate risk capital valuation methods for hydrogeologists to apply straightforwardly to their projects, with integrating probability of failure (hydrogeological uncertainty) and cost of failure (economic uncertainty). The risk capital is essentially the probability of failure times the cost of failure with safety loading added to compensate investors against hydrogeological and financial uncertainty. Fair market prices of risk capital have been valuated using financial mathematics and actuarial premium calculations, and each method has a specific safety loading term to reflect investors’ level of risk aversion. Risk capital results indicated that the price of the risk capital was much more sensitive to hydrogeological uncertainty than financial uncertainty. Developers can manage the risk capital by saving a contingency fee for future events or paying an insurance premium, given that the price of this risk capital is the price of a contingent claim, subsequent to failure in remediation or in foundation design, and equivalent to an environmental insurance premium if there is an insurance company to indemnify the liability for the developer. The optimal framework of investment strategy in brownfields redevelopment can be built by linkage of addressing and integrating uncertainties and valuating risk capital from the uncertainties. This framework involves balancing the costs associated with each step while maximizing a net profit from land redevelopment. The optimal investment strategy, such as if or when to remediate or redevelop and to what degree, is given when the future price of the land minus time and material costs as well as the contingency fee or insurance premium maximizes a net profit.