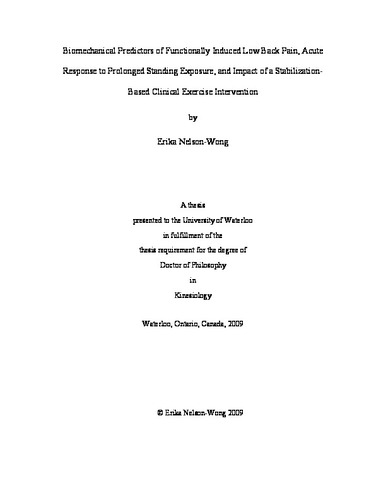 Purpose: Biomechanical differences between people with low back pain (LBP) and healthy controls have been shown previously. LBP has been associated with standing postures in occupational settings. A transient pain-generating model allows for comparisons between pain developers (PD) and non-pain developers (NPD). The first objective was to utilize a multifactorial approach to characterize differences between PD and NPD individuals. The second objective was to investigate the impact of exercise on LBP during standing. Methods: Forty-three participants without any history of LBP volunteered for this study. Participants performed pre- and post-standing functional movements and 2-hours of standing. Continuous electromyography (EMG) data were collected from 16 trunk and hip muscles, kinematic and kinetic data were used to construct an 8-segment rigid link model. Vertebral joint rotation stiffness (VJRS) measures were calculated. Participants completed visual analog scales (VAS) rating LBP every 15 minutes during the 2-hr standing. Participants were classified as PD or NPD based on greater than 10 mm increase in VAS. Participants were assigned to exercise (EX) or control (CON) groups. All participants returned for a second data collection following 4-weeks. Results: Forty percent of participants developed LBP during standing. The PD group had elevated muscle co-activation prior to reports of pain (p < 0.05). Following standing, there was a decrease in VJRS about the lateral bend axis during unilateral stance. PDEX had decreased VAS scores during the second data collection (p = 0.007) compared with PDCON. Male PDEX had decreased gluteus medius co-activation during standing (p < 0.05). Between-day repeatability for the CON groups was excellent with intraclass correlation coefficients > 0.80 for the majority of the outcome measures. Conclusions: There were clear differences between PD/NPD groups in muscle activation patterns, prior to subjective reports of LBP, supporting the hypothesis that some of the differences observed between these groups may be predisposing rather than adaptive. An exercise intervention resulted in positive changes in the PD group, both in subjective pain scores as well as muscle activation profiles. Elevated muscle co-activation in the first 15-30 minutes of standing may indicate that an individual is at increased risk for LBP during standing.