Creation of a gridded time series of hydrological variables for Canada 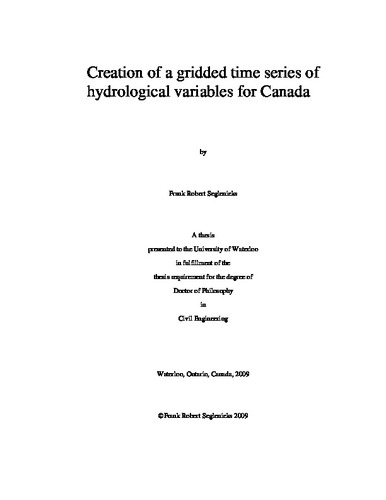 There is a lack of measured, long-term, reliable, and well-distributed hydrological variables in Canada. These hydrological variables include, but are not limited to: temperature, precipitation, ground runoff, evapotranspiration, soil moisture, and snow water equivalent. The objective of this thesis was to establish the best possible distributed estimates of these hydrological variables for Canada over the period of 1961-2000. The first step was to interpolate measured temperature and precipitation across the country. These interpolated values were then used to calculate the other hydrological variables using the Waterloo Flood Forecasting Model (WATFLOOD). The Waterloo Mapping technique (WATMAP) was developed to use topographic and land cover databases to automatically and systematically derive the information needed to create the drainage database. WATFLOOD was calibrated with the Dynamically Dimensioned Search (DDS) algorithm using the difference between the measured and simulated streamflow as the objective function. After a final calibration of 100 separate DDS runs, distributed time series for the hydrological variables were created. A simple assessment was made for the predictive uncertainty in the simulated streamflow results based on the results of the final calibration. As well, the implications of various climate change scenarios were examined in the context of how they would change the hydrological variables. The major recommendations for future study included: finding other gridded datasets that could be used to verify the ones that were created in this study and examining further the magnitudes of the different kinds of predictive uncertainty (data, model, and parameter). The results of this thesis fit in well with the goals of the study on Predictions in Ungauged Basins. This thesis was organized along the principle of “design the process, not the product”. As such, although a set of final products are presented at the end, the most important part of the thesis was the process that achieved these products. Thus it is not assumed that every technique designed in this thesis will be applicable to every other researcher, but it hoped that most researchers in the field will be able to use at least some parts of the techniques developed here.