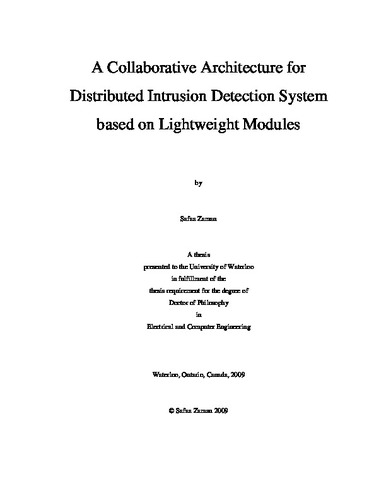 A variety of intrusion prevention techniques, such as user authentication (e.g.: using passwords), avoidance of programming errors, and information protection, have been used to protect computer systems. However, intrusion prevention alone is not sufficient to protect our systems, as those systems become ever more complex with the rapid growth and expansion of Internet technology and local network systems. Moreover, programming errors, firewall configuration errors, and ambiguous or undefined security policies add to the system’s complexity. An Intrusion Detection System (IDS) is therefore needed as another layer to protect computer systems. The IDS is one of the most important techniques of information dynamic security technology. It is defined as a process of monitoring the events occurring in a computer system or network and analyzing them to differentiate between normal activities of the system and behaviours that can be classified as suspicious or intrusive. Current Intrusion Detection Systems have several known shortcomings, such as: low accuracy (registering high False Positives and False Negatives); low real-time performance (processing a large amount of traffic in real time); limited scalability (storing a large number of user profiles and attack signatures); an inability to detect new attacks (recognizing new attacks when they are launched for the first time); and weak system-reactive capabilities (efficiency of response). This makes the area of IDS an attractive research field. In recent years, researchers have investigated techniques such as artificial intelligence, autonomous agents, and distributed systems for detecting intrusion in network environments. This thesis presents a novel IDS distributed architecture – Collaborative Distributed Intrusion Detection System (C-dIDS), based on lightweight IDS modules – that integrates two main concepts in order to improve IDS performance and the scalability: lightweight IDS and collaborative architecture. To accomplish the first concept, lightweight IDS, we apply two different approaches: a features selection approach and an IDS classification scheme. In the first approach, each detector (IDS module) uses smaller amounts of data in the detection process by applying a novel features selection approach called the Fuzzy Enhanced Support Vector Decision Function (Fuzzy ESVDF). This approach improves the system scalability in terms of reducing the number of needed features without degrading the overall system performance. The second approach uses a new IDS classification scheme. The proposed IDS classification scheme employs multiple specialized detectors in each layer of the TCP/IP network model. This helps collecting efficient and useful information for dIDS, increasing the system’s ability to detect different attack types and reducing the system’s scalability. The second concept uses a novel architecture for dIDS called Collaborative Distributed Intrusion Detection System (C-dIDS) to integrate these different specialized detectors (IDS modules) that are distributed on different points in the network. This architecture is a single-level hierarchy dIDS with a non-central analyzer. To make the detection decision for a specific IDS module in the system, this module must collaborate with the previous IDS module (host) in the lower level of the hierarchy only. Collaborating with other IDS modules improves the overall system accuracy without creating a heavy system overload. Also, this architecture avoids both single point of failure and scalability bottleneck problems. Integration of the two main concepts, lightweight IDS and a distributed collaborative architecture, has shown very good results and has addressed many IDS limitations.