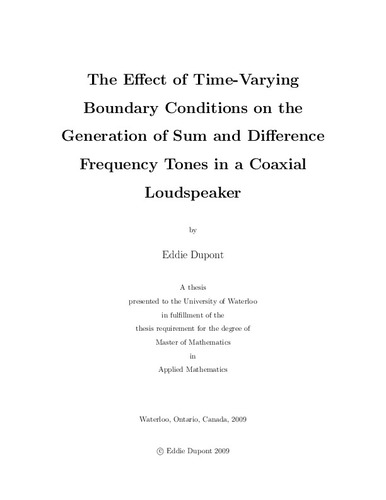 A coaxial loudspeaker in which the woofer and tweeter oscillate at angular frequencies ω_1 and ω_2 respectively, is known to produce sum and difference frequencies ω_± = ω_1 ± ω_2. The generation of these can be attributed to both the nonlinearity of the equations of motion and the Lagrangian boundary behaviour of the low-frequency transducer. In order to characterize the phenomena of interest a perturbation expansion of the field variables is introduced (sometimes called quasi-linear approximation). After deriving a second-order equation for pressure, from which the intermodulation frequencies are obtained, an attempt is made to justify the dominance of the boundary mechanism over that of the fluid nonlinearity. An exact integral solution is then given for the spatial factor of the ω_± pressure terms. In the special case of a farfield on-axis observer an analytic solution is obtained. Several numerical investigations are performed and compared with experiment.

Edward Dupont (2009). The Effect of Time-Varying Boundary Conditions on the Generation of Sum and Difference Frequency Tones in a Coaxial Loudspeaker. UWSpace. http://hdl.handle.net/10012/4496